You are here: HomenextPlacesnextMansfieldnextMansfield PeoplenextThe Last of the Cave Men of Mansfield

The Last of the Cave Men of Mansfield 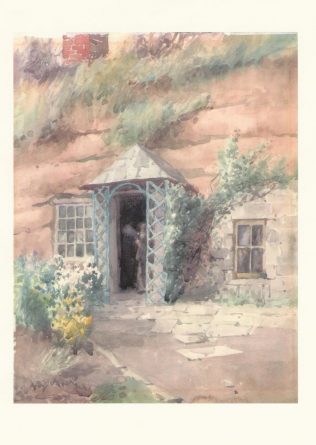 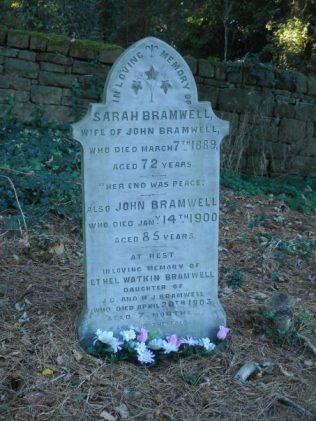 zoom
The grave of John and his wife Sarah
private photo

Born in the year of Waterloo, John Bramwell, the son of Samuel Bramwell and Lydia Marriott was born on 2nd May 1815.

He was baptised at St. Peter’s Church, Mansfield on 7th May 1815, and with his parents resided on Stockwell Gate. His father Samuel was a carpet weaver.

Sadly in 1816, when John was just a baby, his mother Lydia died, and she was buried at St. Lawrence’s Church in North Wingfield.

His father Samuel remarried in 1818 and with his new wife, Martha Edwards, they had five children, half siblings for John.

As for John, he married Sarah Walker in 1836, their marriage took place at St. Edmund’s Church, Mansfield Woodhouse. In the 1841 census they were living in the rock houses on Rock Hill with their daughter Lydia and son Thomas. Having lost one child in 1839. John’s occupation was framework knitter.

Why John and Sarah ended up living in the rock houses has always been hard to comprehend, but nevertheless John was to live there for the rest of his life, which was more or less 60 years. He turned, what was once a storage place for the besom makers, into a modest, but comfortable home for his family.

His family expanded with the birth of seven more children (making a total of nine surviving children) all born in the rock house.

I feel that John had a bit of rebelliousness about him as he named his third child Thomas Feargus O’Connor Bramwell. A bit of a mouthful I thought at the time until I discovered that he’d named him after the Irish chartist Feargus O’Connor. Who during the time  had travelled around Britain speaking at meetings, expressing defiance, determination and hope for the working class. Maybe Feargus O’Connor had made it to Mansfield and John was in the crowd listening to his speech. Nevertheless he had certainly influenced John.

Unfortunately his son Thomas died in tragic circumstances on 14th January 1884, whilst working at Lindley’s stone quarry, during the shunting of waggons Thomas was crushed between two wagons and died instantly. He left a wife and two young children.

Most of his other children lived good long lives, his daughter Sarah lived until her 89th year. She married George Walter Warsop at the Old Meeting House, Mansfield. They had nine children. In a newspaper article Sarah described her time living in the rock house. She told the reporter that the rock house comprised a living room, pantry, and two bedrooms. There was no upstairs, for the top of the rock was not far above the rooms, and when it rained the water would percolate through the sandstone into the living part. Many times had Sarah known it to be necessary to place buckets and basins about the place to catch the droppings of water. It was always very damp in the house.

She went on to say that her father had a delightful garden in front of his rock dwelling and he kept bees.

It is said that John Bramwell was  ‘poor, yet rich in moral worth. He was known to be of strict integrity, sober, industrious, and a good father’. He was ‘interviewed’ about six months before his death, aged 84, and it was noted that for his age his intellect was as fresh and vigorous as though he was forty years of age.