You are here: HomenextPlacesnextMansfieldnextMansfield PeoplenextMarried at St Lawrences Church, 60 years ago 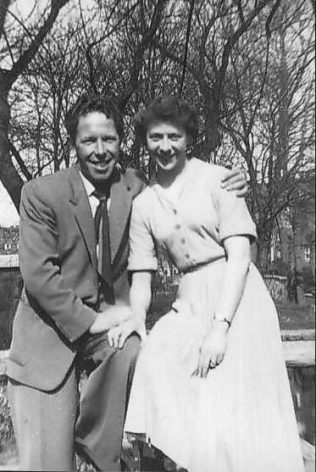 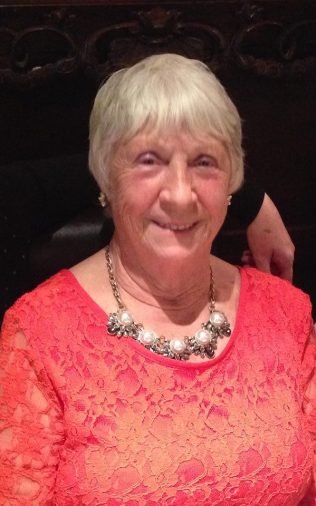 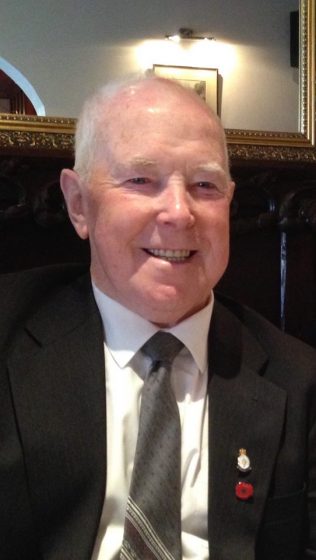 My wife Iris and I, both come from Mansfield. I was born on Bradder Street, in 1933, and my wife was born in Wood Court, 1934 .  Before her parents and family became one of the first occupants of the then brand new housing estates on Maltby Road.  Wood Court, being  a very old  court of 4 blocks, with very antiquated water and sanitary systems, which to say the least was very inadequate for a town that was growing out of the squalor that at one time was the norm. .After the families were all re-housed, Wood Court was reduced to the annals of our history by being demolished ..

Iris was born one side of town, and I was born on the other, and yet, we were both brought into this world by the same Midwife. My wife’s father Tom, had to go and meet the Midwife to make sure she arrived,  It was December and there was 6 inches of snow on the ground, and the transport of the Midwives was a sit up and beg bike. After we as children had gotten over the old wives tale that the Stork brought babies into the world, we then began to believe that the black box that was fitted behind the bicycle’s seat of the Midwife’s bike, was what they delivered the new baby in. How innocent is that ?.

I first met Iris on what became the regular jaunt for most young people of a certain age in those distant Sunday evenings. Fortunately, the Cinema Houses had been given the go ahead to open on a Sunday evening, thus allowing the churches of the town, not to be affected by the additional leisure given to the hard working people. Their working week consisted of five and a half days working. Much thought had been given to Sunday remaining a day of rest.. However, it was 1950, there was work aplenty for all who were able to work. There had been six years of world war, six years of strife and fear. It was no wonder that the people deserved to let their hair down,  and once again begin to enjoy their lives. The Government knew this too, and very gradually things were returning to normal, that is, if pre-war was normal.

It really was an exciting time for all teenagers. Rock and Roll had taken off, it was something very much different from the Ballroom Dancing. As long as you kept to the music you could almost do any steps you like to the quick, country beat. It was Bill Haley and his Comets who first introduced the Jive to the younger generation of Britain…

We, as 16 and 17 year olds’  enjoyed each others company, our  friendship, turned to fondness, our fondness turned to courtship. Before we knew it, the Army Called me to accept the Kings shilling, for, although the big war was over, there were still other wars going on throughout the world. Iris and I still continued our courtship, but now by letter post as it was two years before I got any leave..

On returning home, we used to walk or stroll over Ling Forest, I recall we were both amused by the overhead buckets carrying waste from Crown Farm Pit, tipping their contents onto the Tip before coming back on their return journey to be refilled. I still recall those balmy summer evenings as though it was yesterday.

Iris and I were married at Saint Lawrence’s Church in Mansfield, on Saturday the 16th of July. 1955.  I vividly remember it being one of the hottest days of the year.

A week’s holiday in Skegness, then both back to work. In the beginning , we, like many others did in those days, lived in the front room of my mother’s rented house on Bradder Street. It was during our courtship days, we had started a joint bank account to save for a house we could buy one day..

After 6 months of living in the front room of my mother’s house, our chance came, we saw a detached 3 Bedroom House at the top of the hill on Brick Kiln Lane. £2,800. We had saved £1,000, so had more than enough for a down payment, and a £1,800 Mortgage arranged with the Mansfield Building Society. We had to pay £7 a month, and that was for 25 years. We actually paid £10 a month in order to pay the loan off early..

I worked at Landers Bakery, and Iris worked at Foyster Clay and Ward. So we could both afford the house costs, and luckily, with my “Make Do And Mend.” bringing up, I could do most jobs around the house that required doing. We were also very lucky, in that we had very good neighbours..

Whilst living on Brick Kiln Lane, we were blessed with two lovely beautiful daughters, Diane and Lynn. But our lives were not meant to continue in Mansfield, as I had been offered a promotion to another Bakery close to Manchester.  It was a very difficult decision I can tell you, and one we did not take lightly. Finally, we chose to give the move a chance, as the cost of the move North was to be paid for by British Bakeries, we decided to leave our beloved Mansfield. Nevertheless, I would still be employed by the company that owned Landers, and felt that if things didn’t work out, we were young enough to return to our roots.

At the beginning, I told of my Marriage to Iris at Saint Lawrence’s Church in Mansfield. on the 16th July 1955. Those amongst us will now have gathered it is now July 2015. Sixty long years have now past, and yes, we have reached our Diamond Wedding Anniversary. We have made many memories, we have made many Friends.