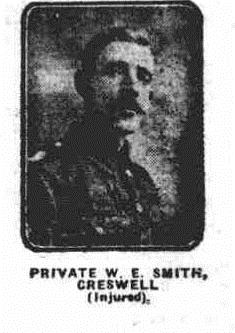 Writing to his Wife and Mother Forest Road, Thorneywood, Nottingham.

In civilian life Private Smith is a miner born in Briar Street Nottingham, He has lived since his marriage in Chancer Street Mansfield and worked at the Creswell Colliery.

It was in this connection that he qualified himself for membership of the St John Ambulance Brigade and his special knowledge resulted in his adventures as a stretcher bearer.

The perilous nature of this task is generally known by this time.

One has to lie down full length to bandage the fallen with anything approaching a measure of safety.

Smith had the misfortune to lose his bearings whilst away from the British trenches and after time made the alarming discovery that he had crawled in amongst the enemy’s trenches.

He managed to conceal his presence however, by spending two weary days and nights without either food or drink.

Meanwhile Smith was definitely reported by the British to have been killed in action, and the comrades he first encountered on his return were more than a little startled by the appearance of what they took for a moment to be his ghost.

He was injured in some manner in the scramble back to safety and now lies in hospital.

In a letter before his great adventure Pte Smith described his experiences in the trenches. He wrote “We are in the trenches again now, we came in again on Friday night after five days rest which we were ready for, it is all right in the trenches after you get used to the shrapnel and shell fire you take no notice of it at all.

I am sitting back writing this waiting for them shouting ‘Stretcher bearer? then you have to go out in the open. Of course it is pretty hot work then.

It is no soft job ours when there is a charge on or a bombardment like it was yesterday. You could not see anything but smoke and the noise was deafening

We were a bit busy but I bet the Turks were more than us, for we did not half give them some lead.

All that you can hear when the shells are coming is a fizzing noise and then the ground goes up and anything else that is there.

Well it has to be done, it will be a good job when it is all over, but we have some good officers and gunners.

Mansfield and North Notts Advertiser 10 September 1915 Private William E Smith related his lucky escape as a stretcher bearer at Gallipoli in a letter to his family.