You are here: HomenextTopicsnextReligionnextJohn Darrell 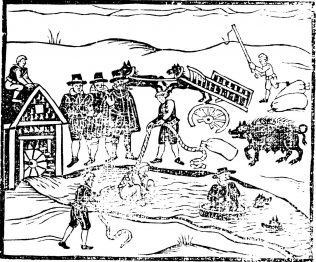 zoom
Testing A Witch
Used in a 1613 pamphlet entitled: "Witches Apprehended, Examined and Executed, for notable villainies by them committed both by land and water"

John Darrell was born in Mansfield in 1562. This was a time when witch hunting was rife, Puritan clergy were on the increase and superstition a part of everyday life. His parents were well enough off, being yeomen, to send John to Cambridge for his education.

Although John had not completed his education when he returned to Mansfield to farm some leasehold land he claimed to be a Puritan minister. Despite the fact that he had not been ordained at that time he had already earned somewhat of a reputation as an exorcist; claiming to be able to drive out evil spirits that witches had cast upon people.

When he was 24 a fellow puritan minister by the name of Thomas Beckingham from Bilsthorpe brought a lady called Catherine Wright to John Darrell in order to have a devil cast out. The exorcism was achieved primarily by fasting and prayer, up to three days in duration. During this period of fast Catherine Wright accused Margaret Roper of having sent a legion of fiends into her.

Margaret Roper was arrested and brought to trial but the magistrate, Godfrey Foljambe, declared her innocent and threatened John Darrell with prison. In fear of this threat John didn’t practice exorcism again until after Foljambes’ death in 1595.

During the intervening period Darrell received his ordination. He also moved, first to Bulwell and then to Ashby-de-la-Zouch. It was whilst he lived here, after Foljambes’ death, that he was called upon to cast out devils from Thomas Darling of Burton-on-Trent . His exorcism was successful and Thomas Darling accused Alice Goodrich of bewitching him. She was convicted but before she was able to be executed she died in prison.

Next, whilst on his travels, he was called upon to exorcise seven people who lived in Clayworth, Lancashire . Six of the seven made a full recovery. Again an accusation was made, this time against a conjuror. He was found guilty and lost his life.

Then came a case that proved to be his down fall. He was called upon to help cast out a devil from an apprentice in Nottingham by the name of William Somers. First he just sent instructions to the clergy but all their efforts failed and finally the Mayor asked Darrell to come himself. Before Darrell arrived the boy had become somewhat of a spectacle with crowds gathering outside his house to witness his fits; some were privileged to enter the house.   Darrell arrived 5th November 1597 and commenced his fasting and prayer. Success was again achieved. However with the boy at his side he declared that William had been so deeply possessed that the devil was likely to re-enter his body. He then stated the signs to look for. He also declared that the reason for the boy’s possession was because of the sins of the people of Nottingham and of his parents.

Because of his success he was appointed public preacher at St. Mary’s in Nottingham . However he appeared to only be able to preach that devil possession was caused by sin consequently the people grew rather tired of this message.

According to his predictions the fits returned to the boy. Some tested the boy by an age old tradition of sticking pins into his unconscious body which seemed to prove that he was not a fake. Others noted though how his fits conveniently finished when nature called. Now Somers started accusing various women folk of being witches but too little avail.

William Somers was taken into the workhouse where he actually admitted being a fake and acted according to Darrell’s instructions. This Set-up glorified Darrell and pleased the boy for he had been able to lie on his sick bed all day and collections were made for him. Darrell’s supporters were not pleased with this accusation and they called upon the Archbishop of York, a known puritan sympathizer, to conduct an inquiry. This was carried out and although no crime was found in Darrell he did have his preacher’s license withdrawn. Those opposed to Darrell called upon the Archbishop of Canterbury to conduct a full enquiry into Darrell’s career. In the mean time preachers from all around the country were voicing their opinions from their pulpits, which caused quite a stir. The whole episode resulted in a law being passed that no one could practice exorcism without a license from a Bishop.

As for Darrell: The final enquiry discovered conclusive evidence, mostly from confessions, in all but the Thomas Darling case that Darrell had previously met those whom he had exorcised and had tutored them on how to act as if they were possessed. He was declared a fraud and imprisoned for a short time. In 1601 he returned to Mansfield where he settled down to a life on the land.

This article was originally published in the Chad in 1992, who have given their permission for its reproduction on this website.