You are here: HomenextTopicsnextEducationnextWinifred Baggaley zoom
Winifred dressed for a play 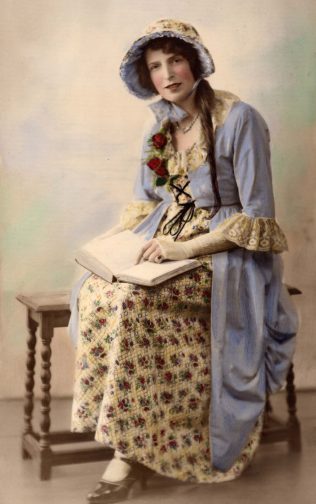 zoom
Winfred in a play 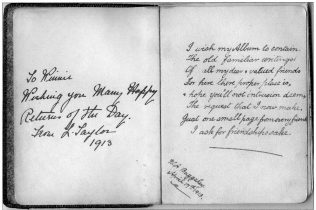 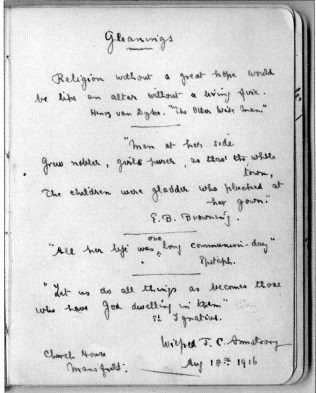 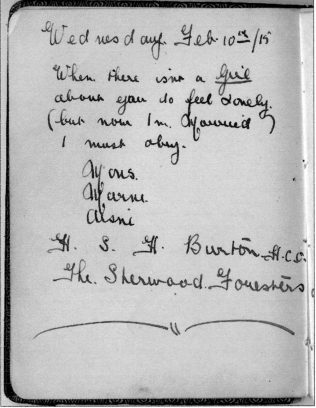 Acknowledgement for this and the other pages relevant to this lady are given to her niece Mrs Audrey Mills nee Baggaley for her contribution of information, oral history, and notes written by Winifred Baggaley.

Winifred Annie Baggaley born 1893, was the daughter of William and Eliza Annie Baggaley nee Howard. She had two brothers George Howard born 1891, and John William born 1895. They were all born in Mansfield and this was their hometown for many years. In 1891 the family lived at 21 Commercial Street, in 1901 7 Plantation Street, and in 1911 at 27 Princess Street. At an unknown date they moved to Grove House, Mansfield.

In her memories Winfred wrote As a toddler 3yrs old, 1 used to come with my brother to Sunday School, down (as it was called then) Blind Lane, a narrow lane with trees over hanging a high wall, where the crows made even more noise than the children.

As a child she attended St Peter’s School, and after winning a scholarship she became a pupil at Brunts Grammer School, Mansfield. While the 1911 census lists her as being a shop assistant at the age of eighteen, newspaper cuttings and family memories recall her being a teacher for 16 years, and a Sunday School Teacher at St Peter’s.

Winifred rode a ‘sit up and beg’ bicycle with a basket on the front.

She is said to have wrote plays and her mum made some of the clothes.

A 1931 newspaper cutting which tells of a play given in the grounds of Westfield Folk House about a May Queen states, ‘All the beautiful dresses were designed by W Baggaley.’

She was given an autograph book in 1913 for her 20th birthday. Her own verse written in this reflects the type of person she was, and where friendship was valued.

The book contains verses of people she knew well such as her family and those ‘passing through’ and being given hospitality at St Peters & Grove House.

Most of her life seems to have been spent at Grove House where she was caretaker. Her niece recalls she was a very busy person, looking after the Curates at St Peter’s, and cooking their meals. At a Bishops Dinner that she catered for, she made two trifles – one with sherry and one with out!

When she retired she went with Canon Bulley (St Peters Church, Mansfield) to the Lake District. She went as a companion to his mother.

The last years of her life were spent in Falmouth, Cornwall where she died aged 89 (year unknown). She left behind personal notes, newspaper cuttings, an autograph book and postcards which reveal information on her family and her life in Mansfield. Her notes, which are signed but not dated, give an insight into St Peters Church* and the Years of the Second World War**.