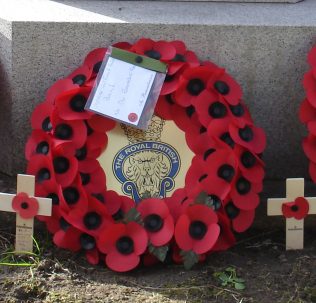 News was reached in Mansfield on Tuesday that Second-Lieut. S L Wilson of the Sherwood Foresters died on 21st from wounds received in action. The deceased officers was the second son  of Alderman J L Wilson, of Mansfield, who has two other sons in the army.

Lieut. Wilson was in the teaching vocation and was educated at the Mansfield Grammar School and was taking his education course at the Training College, Sheffield when he joined the Officers Training Corp, after which he received his commission. He afterwards trained at Camberley College Sandhurst, and Aldershot, where he took his first class honours in musketry and Swedish Drill, in which he was instructing the Anzacs in France up to a few weeks ago. He then joined his own regiment, with whom he was very popular.

He was recently married to Miss Richardson, who was at that time teaching in one of the elementary schools of the town. he received his early education at Brunts.

Strawson L Wilson at the age of 21 lived with his parents John L. & Mary Wilson at 5 West Hill Drive, Mansfield , his occupation was  School Teacher (Assistant).

His father John was a Master Plasterer

With the exception of his father John who was born in Sheffield, the rest of the family were born in Mansfield.