You are here: HomenextPlacesnextMansfieldnextMansfield PeoplenextGrandad Lewis Mellors on July 1st 1916 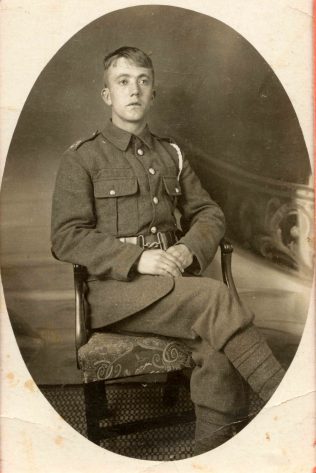 On a day we remember those who lost their lives on this day 100 years ago, we remember too those who survived that experience and went back to “normal” life. This is a photo of my Grandfather Lewis Ward Mellors in 1915 when he enlisted. Mansfield born and bred Lewis was a survivor on that day 100 years ago when 19000 British Troops lost their lives.

In recent years only have I discovered that he was with the 11th Battalion Sherwood Foresters on that day. From the book ” Soldier, Poet , Rebel ” by Miles Hudson, I learnt that his father Charles Hudson, was a young officer commanding Private Lewis Mellors and his comrades on that day; Charles Hudson’s diaries report that by the end of the day:

” Out of a battalion of 710 men, including the transport men and 10 per cent who had been left out of the battle, we had lost 508 men. Out of twenty-seven officers, twenty-one were killed or wounded. Only one other officer who entered the battle, besides myself and Bartlett, survived unwounded.”

Other extracts from the diaries which I think explain the role of the 11th Battalion and how I like to think of Grandad on that day read as follows:

“Our battalion was to be the last of the four battalions of our Brigade to go ” over the top”. We were to carry immense loads of stores needed by the leading battalion, when the forward enemy trench system was overrun, and dump our loads before we advanced on Mouquet Farm.”

After realising that there was no way through the enemy’s machine gun fire:

“We returned to our own front line, crawling all the way and calling on any men we saw to follow us, though few did.

There was no movement in no man’s land, though one apparently cheerful man of my own company, a wag, was crawling forward on all fours, a belt of machine gun ammunition swinging under his stomach, shouting” Anyone know the way to Mucky Farm?”