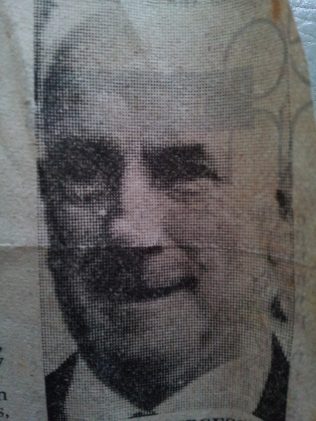 Timothy Burgess,  a name not familiar to many of the younger generation, but to we of the older generation, will be better known as Doctor Burgess.

An Irishman from Cork in the Emerald Isle, he chose to settle in Mansfield in 1928 ,where he lived for close on 50 years. Mansfield was not his birthplace, but he lived and died here, and is laid to rest in Mansfield Cemetery. He was later to be joined by his wife, buried in the same resting place for ever. Their marriage produced two sons and one daughter.

His career in Mansfield commenced as assistant to Doctor McNamara, on Westgate. Then shared Partnerships with Doctors’, S Karwatowski,  and Doctor J. Buckley.

Doctor Burgess’s first surgery was in one of the old stone cottages to the front of Wood Court. Later moving to a new surgery, still on Newgate lane, but closer to Saint Lawrence’s Church, where he was later to be joined in the Partnership by Doctor M.M.McSwiney, I believe the second letter M. stood for Morgan.  Strange really, they were both Doctors to my wife, Doctor Sweeney for our first born, and Doctor Burgess for our second. I suppose it was who was on duty at the time. Both were wonderful first class Doctors.

I recall Doctor Burgess retiring. Alas, his retirement only lasted a short time. Later we were to learn his retirement was due to ill health. I also recall on one visit to our home, I ask him if he would like a drink, declining, he said he had a friend outside that would like one, it took a couple of seconds for the penny to drop, of course, he was referring to his car and petrol.

I also understand that he ran a Medical Unit at High Oakham School during World War Two.

Also a keen sportsman, he was an Honorary Life Member of the Mansfield Lawn Tennis Club, and for 30 years, manager  at St. Philip Neri’s First School.

During my lifetime, Mansfield does appear to have been blessed with first class ‘Olden Days Type Doctors.’