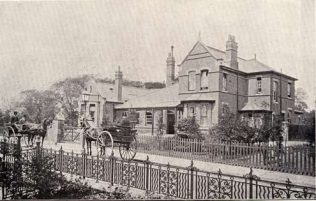 George Whitefield Sparke was christened 24th May 1829 in the Princess Street Independent Church , Devenpool, Dorset . He was the son of Doctor John Guyse Sparke, who was a doctor in the Royal Navy; his father before him also being a doctor.

Following in his fathers footsteps he qualified as a doctor at St. Thomas ’s Hospital, London . After gaining his qualification he joined the army, enlisting in the Dorsetshire regiment, as the assistant surgeon and later in the Royal Artillery. He saw active service in the Crimea and spent one winter in the atrocious conditions of the trenches before Sebastopol.

Dr. Sparke and his young wife came to Mansfield in 1856 and settled into a partnership with Dr. Furness on Westgate as a General Practitioner. He resided at 71 Westgate, which is on the corner of Westgate and St John Street . He was a member of the Royal College of Surgeons, licentiate in Midwifery and a Licentiate of the Society of Apothecaries.

His favourite sporting interest was to ride with the Rufford hunt. One old admirer said of him “He had a splendid seat and could handle a horse as well as anyone in the Rufford country. In my minds eye I can see him and the late Mr. Revil, Mr. White and Mr. Paulson, jogging off to meet as I saw them many a time and what is more I was present at Rowthorne, where the Rufford races used to be held, when he won the cup. I was near the last fence and his horse took it beautifully. He was a fine rider and a dapper little gentleman who was received cordially by everyone”.

After the departure of Herbert Greenhalgh from Bath House to Carr Bank, towards the end of 1861, Dr. Sparke took up residence at Bath House with his three children and two servants. As the years passed by his family grew to six daughters and three sons. By the late 1860s he had three servants, namely a housemaid, cook and kitchen maid.
During the mid 1860s he worked hard with Dr. Walter Whitehead of Mansfield Woodhouse to establish the area’s first hospital. This task was achieved with overwhelming public support by 1867 when a small hospital was established in adjoining cottages in Mansfield Woodhouse. As the nineteenth century rolled on the hospital moved twice before it was established on West Hill Drive.

In the early 1890s he partnered Dr. Martyn on Clumber Street . The following year they were joined by Dr. Robinson but that partnership didn’t last long and he was replaced with Dr. Hunnard within two to three years.

After his retirement in 19O4 he moved to ‘Westhill’ on Chesterfield Road . Dr. Houghton then tenanted Bath House and actually set up his surgery there.   His death occurred just before Christmas of 1912, at his residence, at the age at 83. His obituary describes him as being “One of the best known figures in Mansfield and the surrounding district”. Indeed as we read the list of those attending his funeral it reads like a Who’s who of’ Mansfield (see the Mansfield reporter 29/12/1912 ).

Despite the dreadful weather of heavy storms he was laid to rest in reverent glory. The cortège being led by the Sherwood Rangers Yeomanry band followed by members of the Mansfield Squadron next came the Territorial’s, National Reserve and Old Comrades.

We can only wonder how many thousands of lives were touched by or even saved by this much loved doctor who practiced in Mansfield for nearly half a century.