You are here: HomenextTopicsnextHealthnextPolice Training Centre 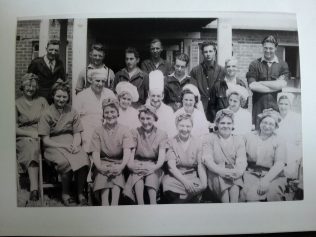 ”Hello, does Richard live there , Please “,

I believe you worked at the Police Training Center with my mother, in 1947.

And that started the chat about how it all came about. I did not expect the story that followed to enfold. but it did, and what a story of his experiences as a youngster the story made.

It came about when I was told he had been interviewed by someone from the new Kings Mill Hospital. It was then I recalled my Mother had worked at the Police Training Centre.

I remembered to start with, the Hospital being an American Camp during the 1939–1945 second world war. I guess it was 1942/3  when when the first contingents arrived. It was not only a training camp for the ” Yanks “, but also a hospital added to the camp.

At the side of the camp many nissen huts were erected to house the many prisoners of war. I recall there were many P.O.W.’s who when sent to the front line, just lay down their arms’ and surrendered. Being a P.O.W. gave them a better chance of staying alive.  To the left of the camp were many allotments that seemed to go for miles. I used to go to help a man who had a horse and cart, from which he sold “firewood”, I used to help chop the  ” firewood”. With the laws today, he would not have got away with it.

I don’t remember the date the Americans vacated the camp, my guess is it would have been as soon as possible after the war ended, maybe 1946 , and 1947 for the police to take over.

Richard and I chatted on the phone for some time, what a wonderful person. He said he remembered the ladies whom he  worked alongside. He told me he would send to me a copy of the group photograph, saying I could use it .

And so Richard, it is my opinion that your wartime story deserves it’s place in our history…