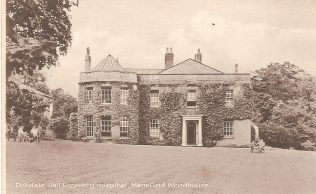 As a child I was a patient at Debdale Hall in 1942.  It was used as an isolation hospital and as a hospital for injured service personnel.

I was taken there suffering from Scarlet fever and a few days into my stay contracted German Measles as well, which was rather a lot for a little boy of five to take in. There was also a girl from the next road to us suffering with Whooping Cough.   No visitors were allowed but my Mum and Dad were allowed to wave at me ( complete with my teddy bear ) through the windows which were barred and had a white cross painted on them.

I was in hospital approximately seven weeks and when I was recovering I was wheeled around the grounds in a wheelchair pushed by an injured soldier, named Mr Purser.   I remember that one of the nurses was called Nurse Cotton and it was the first time I tasted leeks for dinner! – something I developed a liking for.   I made a full recovery despite the fact that there weren’t any of the medicines we take for granted today and with the war being on there were no doctors available.