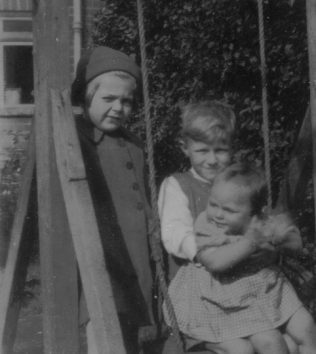 I would like to add my memories of Warsop Road to the comments and pages about Mansfield Woodhouse on this site. I lived on Warsop Road until I was 8 years old in the year that the 2nd world War ended.

The photo is the only I appear to have from that period, as we only had a box brownie camera and films were difficult to get in wartime.  The photo was taken in 1944 in the garden behind 40 Warsop Road and shows me holding a baby girl my parents were fostering, and Jean Taylor who lived next door but one in the detached stone cottage towards the Trough

My home was one of the stone cottages opposite what was then called ‘Savage’s Field’. I remember one year, a Circus arrived in that field and set up their Big Top opposite my house! The Star Inn, at the Village end of the road, once had my Mother’s Great Uncle Jim Pogmore as its Landlord and I had my first pint there when I came of age. Opposite, now part of a Motorhome business, was Jackson’s Fish and Chip Shop. I remember waiting to see the smoke rising from its chimney so I could beg some coppers from my Mum to get a bag of chips – I remember the price going up from tuppence to threepence – inflation was rife!

Further on in what is now the Anvil Classsic Car Garage was then Hobsons mostly coal delivery lorry depot.   Opposite, now an Auto-Electrical place was once a further part of the Pogmore empire a Wheelwrights Yard and Business – I can remember my Grandad talking about the Sawpits that men worked in there.

The shop now housing the hair and Bodyworks business was of course the Post office run in my early years by Mr and Mrs Ince (not Inch as they often seem to be referred to). I can remember the price of a stamp to post a letter increasing from tuppence (blue) to tuppence ha’penny (purple) here and also the first ice cream to appear after the war being sold, on Tuesday lunchtimes, by Mrs Ince. Small paper covered rolls of Lyons Ice Cream but no cones to put them in so people took a basin to collect their share at tuppence a roll.

The Co-op was where the Bed Centre is now and weekly orders were wrapped in brown paper, tied with string, and delivered by horse and dray. The double garage opposite owned now by the Anvil Garage, referred to earlier, during the time I am writing of, was a timber structure which my Dad rented to keep his 1934 Morris 8 Saloon in. No petrol then of course and the car was raised off the ground on stacks of building bricks.

The row of cottages behind the Co-op and now opposite a Fish and Chip Emporium were called ‘Meadow Cottages’ a name that doesn’t get a mention on Google Earth!  My Mother was born in the first one!  It was here, as the War finished, I recall attending a  VE party and enjoying Rhubarb Jam Sandwiches. Proper jam was still rationed and Rhubarb was the first ‘fruit’ of the year to make homemade!

As the days lengthened around pancake day, with my friends, I used to play Whip and Top along the road as far as the bottom of George Street. Little traffic in the war years, just an occasional farmer’s pony and trap or a few cattle being driven to Savages Slaughter House. I do remember once however seeing, just once, a Convoy of Tanks heading to the Sherwood Forest training grounds. They left the pavement kerb edgings, along the front of the wall bordering Savages Field, chewed up by their tracks as a memento of their passing.

I could write much more of the goings on along Warsop Road in the early 1940’s but hopefully these will stir up memories for other people.