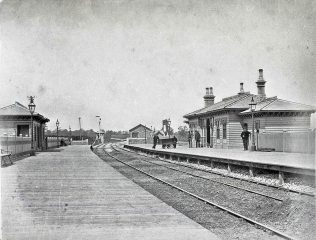 I was 9 years old, and my sister Joyce 6 when we were evacuated from Southend on Sea, it was Sunday 2 June 1940,  (when Dunkirk was at its height), and we arrived at Mansfield Woodhouse station early afternoon. We were marched down Station Hill, past allotments (Bedstead Alley) to Oxclose Lane School.

We were selected by Mr and Mrs Cooke of Sunnydale Poultry Farm, Shirebrook Lane, and found ourselves in heaven – a farm with chickens, pigs, geese and fields all round. Nearby was a quarry and the railway, and a field with cows, and Parmenter’s farm.

One of the first things that the local people did was to organise a picnic to Garibaldi Wood also known as ‘Packer’s Puzzle’, on Peafield Lane. Does anyone know the origin of either of these names? This was a very exciting and enjoyable day.

We were soon merged into classes at Oxclose Lane School (me) and the National School, Welbeck Road (my sister). The teachers there were Mr Bateman, Mr Lucas, Miss Keetley, Miss Brown, Miss Chapman, and the Headmaster, Mr W.A.C. James, as well as evacuated Southend teachers, Miss Spilke and Miss Whisker). Mr Bateman was tough but a good pianist and I learnt to love all the national songs. He taught us several poems which I still love.

Later, things went wrong at the farm and we were moved around, first to Mr and Mrs Owen at 15, Tennyson Avenue, then to Mr and Mrs Collier at 44, Stainforth St. and finally to Mr and Mrs Marchant at 6, Coke St. (now stupidly renamed New Haven Avenue). Harry Marchant was a marvellous chap, who worked permanent nights at Cresswell Colliery. He had a narrow escape serving in France in the Great War, and survived the Cresswell Colliery disaster of 1950.

I was active in the boy scouts. The Rev Frampton (Frambo) of St John’s was an important figure here and so was a certain Mr Greensmith. At first I was with the 6th Mansfield group which was based at the church by the cattle market. The scout leader was Russell Yeomans and his brother from Forest Town.

We went on a camp in 1943 on a site near Papplewick (but on the opposite side of the Nottingham-Mansfield road). One of our co-campers was the son of Dr Tweedie who lived in the big house near Crown Farm (Sherwood Hall – is it still there?). Tweedie was related to the actor Victor McLaglan. Later I was with the 4th Mansfield Woodhouse troop based on St Edmunds. I forget the name of the leader but he lived at Park Hall. One of his friends was a certain Wallace Stringfellow. We used to meet in the chapel at the bottom of Sherwood Street on the railway side.

I never went in St Edmunds church but did go to Sunday School in Turners Memorial Hall. I was aware of the St Edmunds football team. One of the stars was Charlie Anners – known as ‘Wag’, as were all people named Charles. Is that still the case?

I used to deliver papers for Lees in Welbeck Rd. All the way up Warsop Rd as far as Churchmans’s tannery factory. Mr Lee was a very nice man. The shop continued under the name Lee for some years after his death, but later changed name and is now no longer a newspaper shop. I also delivered for the shop at the bottom of Mansfield Hill by the railway bridge. I forget the owners name.

My mother came up to visit us and later died in 1942 of TB and is buried in Mansfield Woodhouse cemetery.

When we first arrived  from Southend the ‘Billeting Officer’ on the council was Mr T.T. (titty) Hudson who lived in St Edmund’s Avenue. He took me and my sister on frequent visits for x-rays to Dr Brown in Hermitage Rd (off Sutton Rd) in view of our mother’s death from TB.

Someone else I remember; ‘Smasher’ Smedley a gifted piano-accordionist.

I have many more memories as I stayed in Woodhouse, with brief interruptions until National Service in 1950.