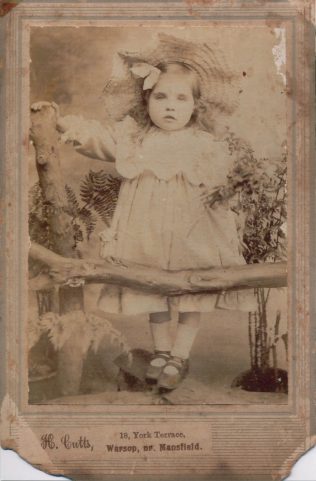 I am currently putting together a chapter for a book on (what we thought was a) a little known photographer of the South Coast of Australia – Herbert Cutts.

Last year some pictures appeared from Britain of some early pioneers and coal miners of the Mount Kembla region circa 1910 or a little earlier (photographs of this area and era are far and few between and of great interest to us local historians) and a couple were stamped on the back “H. Cutts, Kimbla Hights” (Kembla Heights).

We at first thought he was simply a novice and became intrigued as to why none of us had ever heard of him. How exciting – our very own local photographer! What was the back story, and surely someone must have more photos?

Since then I have been hot on the trail and uncovered quite a bit of information about this somewhat eccentric man who was also well-known as a musician. He arrived to the Antipodes some time between 1908 and 1910.

Recently a studio portrait turned up circa 1901 which has stamped on it “H. Cutts, 18, York Terrace, Warsop Dr or Or. Mansfield” proving that indeed, he was no amateur and had been working in the Mansfield area for a number of years prior to his immigration.

Kelly’s Directory of Nottinghamshire and others shows he was offering his services in the local area between at least 1901-1908.

And I am wondering if there is any further information on him or whether anyone knows of any other photos that will help me piece together the story.