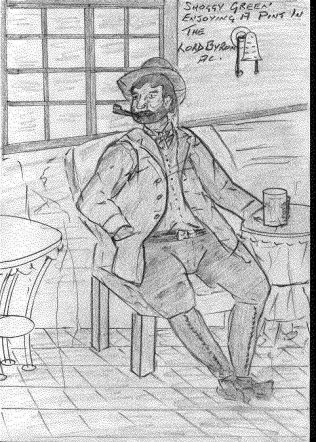 If there were any likeable characters on Bradder Street, Shoggy Green has to go down as probably the most memorable of my time living on the street that was full of characters, all for different reasons. This is to let the readers know what life was like 70 years ago on the street.

I believe that Shoggy lived near the bottom of the street, at either number 5 or 7. I guess someone may correct me. He lived alone? I have to say that this was unproven, for some believed that he looked after his elderly mother, who was housebound, and whom no one ever set eyes on. He really never bothered anyone. In fact he wouldn’t have looked out of place in any of Charles Dickens novels. Don’t ask me why he was called Shoggy, I never knew, but it kind of fitted in with the style of life he led.

Shoggy had a small horse and cart and one could often see the two of them trotting along Quarry Lane. Shoggy would be sat sort of side saddle at the front of the fairly small flat back cart. Most folk had a dog in those days, but I cannot just remember if Shoggy had a dog. I suppose he did have a dog though, for somewhere from my distant memory, I recall seeing a small dog sat with him on the Cart. His horse and cart could often be seen outside his house, the horse wearing a nosebag from which he would be feeding.

He must have often been living in his front room, for if any kids went near the horse, Shoggy would soon be out to clear the kids off, using his only expression that somehow used to work, it was, “Be Gone, Be Go”. Shoggy is the only person in my life that I have ever heard use it. When going into the house for something to eat, and if there were any kids about, he would pick out the biggest to hold the reigns of the horse, this would keep the other kids off.

Shoggy, like quite a few people of his time, earned his living transporting anything that was too large to go on a barrow.

However, Shoggy had another trick up his sleeve. Shoggy had a smallholding, a smallholding that was protected by the cover of the large archway. It was here that he kept his pigs, chickens, and stable for his horse. The width and height of the archway protected and kept everything dry from the weather. This included the cart and sheds. There was plenty of water too, for just a few yard away was the river Maun which supplied all the water he required. Just upstream were some allotments that also benefited by the water from the river. The entrance to his stables was through a five barred gate from the lower road that led to the old Quarry. Although it wasn’t so old for it was still a working quarry, I never did know the name of that road. Alas, the viaduct is no more, for it was demolished in the 1970’s.

I don’t know what really happened to Shoggy, but to me, he will always be the old man from a time gone by.. So all that is left for me to do now is, as Shoggy used to say “Be Gone” “Be Go” “so long”.