You are here: HomenextTopicsnextEducationnextRobert Dodsley 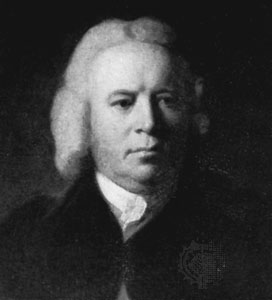 The ancestors of Robert Dodsley had resided for several generations in Mansfield and had engaged in the business of farming and malting, by which they enjoyed a high standard of living. Robert’s father however chose a different career, that of a school master. This meant that Robert was not born into the wealth that his forebears enjoyed.
Robert was born 13th February 17O4 to parents who were certainly dissenters and probably Presbyterian. Since his father taught at the Mansfield Free School Robert received a good education but the privilege of going to university was un-affordable.

He entered an apprenticeship to learn the trade of a stocking weaver but must have despised this work for be soon ran away to London where he secured work as a footman, moving several times within this occupation.

It was whilst in service that Robert published his first poem, in 1729, entitled ‘Servitude’. He had written several works to prior to this date, some of which were published in later years. Many of his early writings indicated that his father would not forgive him for deserting his apprenticeship; they appear not to have been reconciled over this act.

Over the next few years he was able to write and publish more poems such as ‘Kitty, a Pastoral’ and ‘The Devil is a Dunce’ both of which were humorous pieces. They must have been well accepted for within a few short years he was able to leave ‘Service’ and set up his own business as a book seller in Pall Mall.

After writing the poem entitled ‘The Toyshop’ he sent it to Alexander Pope who recommended that it should be read in Covent Garden where, in 1735, it attracted great attention. Now he turned his abilities to writing plays. His first play to be accepted was entitled ‘The King and Miller of Mansfield’, which was performed at Drury Lane 1736-37 and proved to be a theatrical success.

This play has, since that time until present day, become synonymous with the name of Robert Dodsley and with the name of Sir John Cockle who was the Miller of Kings Mill on the border of Mansfield and Sutton-in-Ashfield. The king being Henry II. Not only was the play a favorite in London and Mansfield but it has been performed the world over. In 1762 a French composer used the story for an opera.

Henry, our royall king, would ride a hunting
To the greene forest so pleasant and faire;
To see the harts skipping, the dainty does tripping:
Unto merry Sherwood his nobles repaire:
Hawhe and hound were unbound, all things prepar’d
For the game, in the same, with good regard.
Later on in the story we read the following verse describing a conversation between John Cockle and the king; however John did not know at that time who he was entertaining. Then I think, sayd our King, that it is venison.
Eche foole, quoth Richard, full well may know that:
Never are wee without two or three in the roof,
Very well fleshed and excellent fat:
But, prythee, say nothing wherever thou goe;
We would not, for two pence, the kinge should it knowe.

As Robert’s fame grew in the world of literacy so his circle of friends increased to include many fellow poets, playwrights and authors. His initial success was achieved by the fact that he was able to publish his own works. Then he began to publish several magazines, which included such titles as ‘Public Register’, ‘Museum’ and ‘Receptor’. Through his success as a publisher he was able to offer his services to publish the works of his new found friends. Soon he was publishing for Pope, Johnson, Akenside and Young, amongst others. He became one of the foremost publishers of his day.

Also amongst his close friends was Sir Joshua Reynolds who painted his portrait in 1760. Three years later Robert retired in order to enjoy his fortunes. Unfortunately though his retirement was short lived for he died, after an attack of gout, in September 1764 just one year after retirement.

Perhaps we can pause to wonder from whence Robert gained his talent. For despite his father’s dismay he too was a poet and writer! Following is the first verse of a lengthy poem written by Robert Dodsley senior, the school master and father:

All letters even at head & foot must stand:
Bear light ye pen & use a steady hand.
Carefully mind to mend in ev’y line-
Down strokes are black but upward strokes are fine.
Enlarge your writing if it be too small;
Full in proportion make yr letters all.
Game not in School time when you ought to write- Hold in your elbow; stand fair to yr light.
Join all yr letters by a fine hair stroke-
Keep free from blots yr piece & writing book.

This article was originally published in the Chad in 1992, who have given their permission for its reproduction on this website.