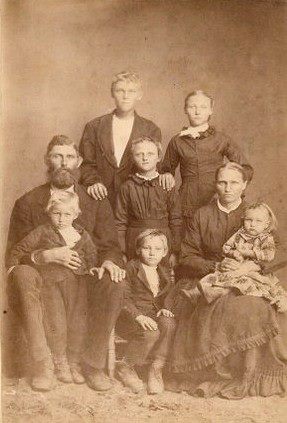 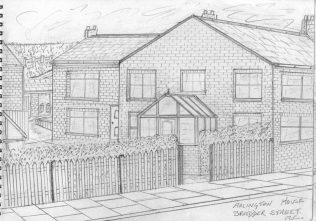 With grateful thanks to Angie Roche for the Photograph and further information of the family who helped make Mansfield a great place to live.

This piece of Mansfield History is just too good to miss.

George Bradder, an ordinary man, born in Mansfield on the 16th of February 1834.

Marriage and the USA

George was a Stonemason Builder, and like many others before him, decided they would stand a better chance of having a better life in the States.

The couple settled in Brooklyn, New York where very little of their life in Brooklyn is known. It does appear as a family they did very well, for George’s work brought riches and life style which far exceeded the life he had in England, so much so that his brother Alfred also emigrated to America in 1870.

Whilst living in the States, George and Sarah had six children, (The family picture above was taken in America) and bears the resemblance of a well off family. George paid quite a few visits to England during the family life he enjoyed whilst living in the United States.

Not sure whether the trips to England were for business or pleasure, I suspect it was business, for George and his family moved back to Mansfield in the late 1870’s. Whether it was the green green grass of home that George and his family longed for, or whether it was the old hometown , we shall never know. He founded his family Building Company during the 1870’s. in Mansfield. It must have been at this time that George built the street that was named after him, Bradder Street. Over 100 years later, the street has gone, but his name is carried on as Bradder Way.

It would be proper to add that Alfred did not return to Mansfield but remained in the States with his family.

It may have been the American connection, for George built a larger house for his family at the bottom of Bradder Street, giving it the name of Arlington House. It was a large house with a large garden, a large greenhouse, and a large vestibule at the front. This was something ordinary folk had not seen before.

It is quite possible The Bradder Building Company built many of the streets of our town Mansfield for there are many of his type of the older houses that still stand today. They bear a remarkable likeness to Bradder Street’s 2 up 2down, and 3up 3down houses. Whether it was the fashion, cost or the style of housing for the industrial area of Mansfield, I don’t know, but the terraced houses of the day seemed to be all built from the same set of plans. The bay windowed types of terrace house, all had the bay windows fitted with a wall built in front of the bays.  Plus all the houses had back to back  facing rear doors that formed a small back yard. Could it be that the Bradder Building Company were responsible for building many of the houses in Mansfield for the pit workers growing communities ???  It is believed that he also built Clifford Street in the Nottingham Road area..

Having been born and lived on Bradder Street, I know my Mothers family had lived on the street for many years, also very probable that my Grandfather, and Grandmother on my mothers side knew the Bradder family, for they lived on the street long before I was born. My Grandmother died at quite an early age, and so my Grandfather moved to Lord Street, and my Mother took over the tenancy of the house, with my Father where they brought up their children.

All was not milk and honey for the Bradder family, for as they say, money does not always bring you happiness. It happened whilst George and Sarah were enjoying their grandchildren, it is not certain if one of George’s children got married and was living on either Bradder Street or Victoria Terrace in the Brickyard – I have found out since that the man that owned the Brickyard was a man named Tomlinson, and the brickyard was known as Tomlinson’s Brickyard. It was then that tragedy struck the Bradder family for George and Sarah’s grandchild, who was only 4 years old, drowned in the brickyard pond. I don’t think they ever got over the loss and grief of losing a family member.

It was said that the child was drowned just 50 yards from where he lived. The brickyard pond has been notorious for the lives it has claimed. What a blessing it was when in the 1940’s the decision was made to fill it in.