You are here: HomenextPlacesnextPleasleynextJohn William Kaye The Younger. 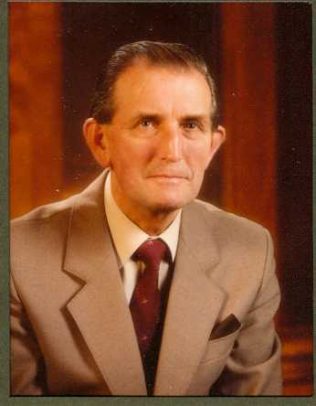 This is the story of Mr. John William Kaye, the younger. The son of Mr. and Mrs William Kaye, the Lord Mayor and Mayoress of Mansfield in Nottinghamshire in the year 1964/65. Also the owner of the Self Service Shop built on the Ladybrook Estate.

William was born in Wakefield, Yorkshire in 1902, his father was a Coalminer.  William wasn’t very old when the family moved lock stock and barrel to Rotherham, and it was there that William was educated at Tinsley Council School.

It was 1916 when he was only 14. William decided to enlist in the Army, giving his age as older, the Army took him in, I believe he did his training at Clipstone Camp, when after 2 months of Square Bashing, the truth came out,  and William was kicked out. Although, he did get his demob papers to prove he was no longer a soldier but a civilian once again. From leaving school at the age of 13, William had worked with his father at Rotherham Main Colliery the 8 years up to 1921.

Mrs Gladys Kaye, who’s maiden name was Gladys Wood, was born near Loughborough, in Walton on the Wolds. It was in 1921 that her father moved with his family to Mansfield. Mr Wood was a Hosiery worker, and moving to where the money was, they lived in “Cobden Place” wherever that was?

It was during that same year that William went to live with his Uncle who was a Master Sinker working at Pleasley Colliery. His uncle gave William a job, and he went to lodge at the New England Public House on Pleasley Hill. It was here that Bill, (everyone called him Bill) met Gladys, for she was a close friend of the Landlords daughter. Bill worked at Pleasley Pit for eight months, giving Bill and Gladys plenty of time to get to know each other. Bill worked assisting his uncle at Pleasley Colliery until his marriage to Gladys.

Following his marriage, he got a job at Clipstone Pit, who were the first Nottingham Pit to install coal cutting machinery. He also went to work at Thoresby Colliery until about 1930.

Bill went back to Pleasley Colliery which by now were also being Mechanised. He stay at Pleasley for some time, until 1943 to be precise. It was in that year that Bill experienced a very bad accident, he was buried by a roof-fall, and talk about being lucky to be alive, Bill spent over two years in Mansfield Hospital, and had many visits afterwards. This brought about an end to his 30 years as a miner. A coal mining gentleman who went from miner to Mayor of Mansfield!

Bill and Gladys’s marriage produced two children , John William Kaye, and Sheila Kaye. John William was born 28th September 1926, his first name was John, but he was also known to everyone as Bill Kaye.  Bill (Now Junior) married Miss Edith Slack, a Mansfield girl. Bill and Edith were married at St. John’s Church in 1947. They had one daughter Jane, born September 1957.

Many people knew Bill junior as the owner of Kayes Self Service Store on the Ladybrook Estate, Mansfield,  but very few know that once upon a time he was a policeman in Mansfield. Had Edith agreed to move to Nottingham when Bill was offered a promotion to the City, who knows , life would have been very different. I believe he was P.C.228, commencing his Police Training in January 1950.

From his leaving the police force, Bill decided to start a Mobile Grocery round. He purchased an old redundant single decker bus which he kitted out as a mobile shop. He worked very hard at building up his round , being at the same place at the same time every day. He had a lot of help both from his father and his wife, and people got used to purchasing their groceries from him, consequently his business grew, albeit very tiring with long hours.

I met Bill in my capacity as a Supervisor at Landers he Bakers. We had leafleted the estate with offers. I was there at the opening of the Ladybrook Shop, and what a busy day that was, the shop was heaving all day. From that day the Kaye’s and our family became very good friends.

Bill and I played a lot of Golf together, both at my Golf Club and Coxmoor where Bill was a member, eventually he was made Captain of Coxmoor. His Captains Day was certainly one to remember.

One of the biggest shocks to me was Bill telling me he was leaving the shop,  and for whatever reason, they moved out of the flat over the shop and bought a house on the Grange Farm Estate.

Tragedy  was to strike the Kaye family, when Jane at the age of 47 died 11th June 2005. Jane who had a long standing illness had looked after her Mother and Father for 15 years in spite of her own illness and problems. Neither Bill nor Edith could accept the situation, and in a few short months, twelve  to be precise, John William Kaye, also passed away on 21st August 2006. Edith with the help of friends lived until the age if 88, she died in 22nd February 2013

This was the end of the line for the family who owned Kaye’s Self Service Shop on the Ladybrook Estate. They are all together in Mansfield Cemetery for Eternity…R.I.P.