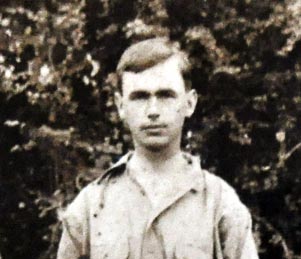 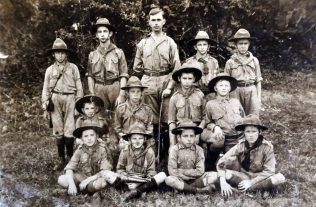 zoom
Syney Marlow and the First Figi Scout Troop
Circa 1914

The 1901 Census shows the family  living at 51 Rosemary Lane Mansfield, and in 1911 at 62 Rosemary Street Mansfield, where Sydney’s age is given as 19, and his occupation – Railway clerk.

He was educated at Queen Elizabeth Grammar School for boys, Mansfield.

Sydney served as a scout leader with  a Mansfield Scout troop, having been issued with a Scout Leader Warrant in October 1912 (details are scarce on the troop that he was attached to).

He served for one and half years in the Officer Training Corps, and 2 years in the Mansfield Rifle Corps. 4 years in the 8th Battalion, Sherwood Foresters, Notts and Derbyshire Infantry Regiment.

Sydney left London as a 2nd class passenger per the Orient steamship vessel ORSOVA on the 4th June 1914 for Sydney Australia, and arrived in Fiji late 1914 to join his elder brother Alf Marlow who had his own building company. Sydney is believed to have been a civil servant here in Fiji – any information on his employment in Fiji would be appreciated.

He started scouting in Fiji late 1914, we have an excellent photo of Sydney F Marlow with the first troop from this period.

He was a member of the `1st Fiji Reinforcement, Fiji Defence Force

Left Fiji in April, 1916 as part of a group of European Volunteers for UK, (please note at this time the UK did not want others than Europeans volunteers from the colonies.)

He was attested in London on the 18th July 1916 as a Rifleman, service number R/30888 , Ist Battalion, Kings Royal Rifle Corps

He his commemorated as follows :-

Thiepval memorial France along with 70000 plus others missing in action, his name is inscribed on pier and face 13A and 13B

The Fiji Times Roll of Honour

The Book of Remembrance

His name is recorded on the new Memorial established on Vuya Road Suva Fiji, next to the new Parliament.

His memory honoured by Scouts

He was furthered honoured by the presentation of a Fiji Flag (Blue ensign with the coats of Arms of the Colony of Fiji) in his memory by 6 Fiji Scouts to a Mansfield troop in 1929. These 6 scouts attended the world Jamboree in the UK that year, the name of the specific Scout Troop is not known. We do know that the flag was presented by Fiji King’s Scout, Leslie Keys

He will now be recorded in the Scouts Roll of Honour, Gilwell House London that records the names of known scouts/scouters who gave their life in WW1,this is a direct result  of our research re S F Marlow.

We are informed by Gilwell House Archival section that there is a report they have on file that Sydney F Marlow met with Baden Powell when he was on a visit to Scout troops in Nottinghamshire area in 1912, it is believed that S F Marlow told Baden Powell that he was planning to go to Fiji and was asked by him to start Scouting there.

The following is from the records held by archives Gilwell House and reads as follows, we hold a copy of this extract on file.

Quote “Fiji, The Fiji Troop has made a good start with Mr S.F. Marlow (the Hon. Secretary) as Scoutmaster and Mr J. Brayton as Assistant-Scoutmaster.

H.E. the Governor, Sir E. Sweet-Escott, the Chief Scout, has interested himself much in the Troop, and Lieut.-Col. T. McOwen, commanding the Fiji Defence Corps, has been of great assistance in lending camp equipment and allowing the use of the Orile Hall.

Lieut.- Col. McOwen will, it is hoped. Accept the position of Commissioner, and the Rev. J. Jackson that of District Commissioner, of the Colony.”  Unquote

The above extract is from the, Scout Headquarters Gazette of September 1915

This is research in progress, the purpose of this project is to gather as much information as possible on the above named so that this information is available for the Centenary of Scouting in Fiji in the year 2014. The information herein has been gleaned with the assistance of many persons and organizations, to who we express our sincere thanks.

This information is subject to amendment as further information comes to hand.  If you would like to add a comment with new information  please feel free to do so,