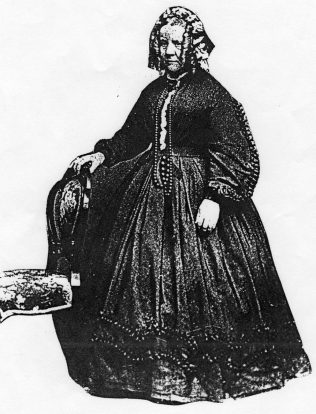 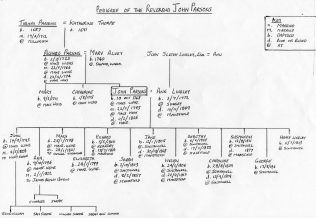 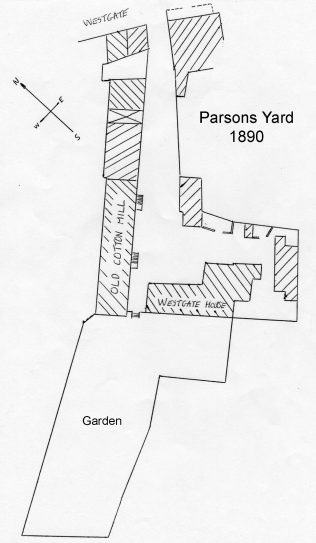 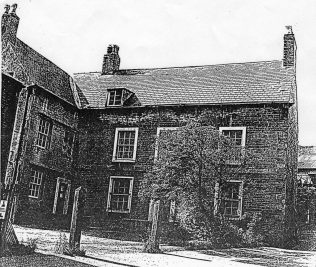 During the early 1800s the population of Mansfield was concentrated within a quarter mile radius of the Market Place. Apart from the residential properties on the main streets there were scores of cottages, small industries and retail businesses located in the dozens of courts and yards which riddled the town centre. However amongst these yards there was one exception to the rule : Parsons Yard, for within this yard, which was located on Westgate, there were no cottages but a fine Gentleman’s home with over an acre of gardens known as ‘Westgate House’. Apart from the house and its outbuildings the business of the yard, at the beginning of the 19th century, was dominated by a cotton mill.

This yard derives its name from the Parsons family who first moved into Westgate House in 1816 with the last member of this family passing away in 1889. Upon his coming of age, in 1789, John Parsons of Mansfield Woodhouse inherited substantial property from his father’s estate. Although he had two sisters he was the only son of a local Landowner. Around this time he was also ordained into ‘Clerical Orders’ for upon his marriage in 1793 he was titled ‘Clerk’ and by 1800 he was referred to as ‘Reverend’.

When Thomas Parsons, the grandfather of John, married in 1712 he was referred to as a ‘Labourer’. However Richard, the father of John, was called a ‘Gentleman’ upon his marriage in 1766. Consequently the family had risen from rags to riches in a very short space of time. Judging by the witnesses of Richards’ will we can see that he had friends amongst the wealthiest families of the area, including Squire Lindley of Skegby Hall. This proved to be a very beneficial relationship as John Parsons married his daughter who, at a later date, inherited handsomely from her father.

From as early as 1793 we can find the name of John Parsons appearing in the Customary Court Records of Mansfield relating to the leasing or surrendering and the purchasing or selling of property. In 1793 he leased, from the Duke of Portland, land in Mansfield Woodhouse, Shirebrook and elsewhere. As the years went by he held or owned many other portions of land in South Leverton and Mansfield, including property in the middle of Mansfield . In 1798 he auctioned some of his Mansfield Woodhouse land and the following year he sold his household furniture including such items as a ‘well toned piano-forte’, books and a machine for splitting beans, in readiness to take up a new Clerical position in Rearsby, Leicestershire. He held, whilst at Mansfield Woodhouse, a game licence and was a regular subscriber to the Association for Prosecuting Felons.

Within four years he left Rearsby to take up a new position at Southwell Minster where he remained in Clerical Orders until 1816. John had previously leased a house on Leeming Street , Mansfield where his widowed mother resided from the time that he left Mansfield Woodhouse until his return to Mansfield . So it was in 1816 John resigned his Clerical position at Southwell to concentrate on his business ventures in and around Mansfield . He purchased the copyhold, from Jabez Unwin, of Westgate House, along with its yards, garden, outbuildings and a cotton mill, which was situated next to the house. He moved his mother, wife and twelve children (one had died in infancy) into the beautiful Elizabethan residence. Thus started the 72 years of residence of the Parsons family in Parsons Yard.

Whilst John raised his large and healthy family he expanded his cotton spinning business and land ownership to include the purchase of three houses on Westgate, adjoining the entrance to the yard, and then let them to tenants. After his three eldest children had married, in the early 1820s, he died in 1826 at the age of 57 and was buried in the church yard of his ancestral parish – Mansfield Woodhouse.

After the three married children Dorothy was the next to leave home; she went into ‘service’.Her early career is uncertain but in later life she became Housekeeper to the Hallowes family of Glapwell Hall. However after all her spinster sisters had passed away she returned to Westgate House in 1877 until her death in 1888, which ended the Parsons dynasty in Parsons Yard. During those final eleven years Dorothy turned the house into apartments and let them.

The fifth child, Richard, never married and spent most of his life at Westgate House with his unmarried sisters. He was often referred to as an ‘Agent’ or ‘Commercial Agent’ while in 1851 he was recorded as an ‘Ale, Porter, Wine and Spirit Merchant’. Upon his death he was elevated to the status of ‘Gentleman’.

After the death of Johns’ widow in 1849 Elizabeth, the eldest to still be at home, took charge of the house while Sarah, Jane, Susannah and Helen ran the new family business; Westgate Academy. Susannah was the last of the school mistress sisters to die, in 1877 as a result of a fever believed to have been contracted from polluted water from one of their wells, shortly after having a new pump fitted.

Upon the death of these five spinster sisters each left their valuables primarily to the other remaining sisters until finally the sixth spinster, Dorothy, inherited the majority of the Parsons estate. This system enabled the family to keep their magnificent house along with the Academy. Finally Dorothy instructed her executors, in accordance with her fathers’ will, to sell the estate, valued at nearly two thousand pounds, which was then dispersed amongst, her nephews and nieces.

Soon after the death of Reverend John Parsons the remaining family at Westgate House ceased trading as cotton spinners and converted the mill into school rooms. Westgate Academy was opened and a new family business embarked upon. This was obviously a much more suited occupation for five educated spinster sisters.

The mother, Ann, took no part in the running of the school and Elizabeth remained as housekeeper, although her skills of knitting and netting were often demonstrated to the students. Initially no other help was needed to run the school but after the deaths of Helen and Sarah hired help was called upon to teach writing and arithmetic. After the death of Jane a further school mistress was hired to teach the Catechism amongst other subjects.

By all accounts and stories this academy was well respected and produced many future businessmen of Mansfield . Although the majority of students were members of the Church of England others were equally well accepted including a number of Quakers.

From an account entitled ‘School Reminiscences’ by Mrs E. Manners, dated 1923, a former student of the academy, we can tell by her many stories that the children were just as frivolous, naughty and high spirited as any other. However should they had been caught out, then discipline was most certainly administered. One such discipline administered by Miss Susannah was to whack the child on the head with her ‘fat wooden pencil holder’ and then stand him or her on a stool in front of the rest of the class. Miss Jane presided over the younger children and although she was of a mild nature discipline was still foremost.

Miss Susannah presided over the older children. She and her sisters stuck rigidly to the various text books of the day such as ‘Guide to Knowledge’ and ‘Brewers Guides to History and Science’ amongst others. Friday afternoon was devoted to grammar while Saturday was the time when Miss Susannah tested the students to find out how well they had remembered the weeks’ lessons. Whilst listening to each student reciting their lessons Miss Susannah would sit at the head of an oil-cloth covered table armed with her pencil box and flanked by her celestial and terrestrial globes which no one except the very advanced students were allowed to touch; even then only with great reverence.

It is said that Miss Susannah was an awe inspiring person with a necessarily loud voice. She had a keen nose for apples and could sniff one out of the remotest students’ pocket who was then ordered to place it on the ledge outside the school room window. Although Richard resided at Westgate House his only contact with the school would be to take the occasional boarder student for a walk. However one other relative, a nephew, would occasionally visit and cause a disturbance by kissing the girls and joking with the boys.

‘Breaking Up’ parties were allowed and they consisted of buns and home made wine or coffee. The academy finally closed its’ doors in the mid 1870s. When the estate was about to be auctioned off, after the death of Dorothy, Mrs Manners recalls that ‘I was wondering around the house on view day, when I came across the old celestial globe, tucked away in an attic parted from its stand and from its terrestrial companion derelict and bereft of all its former respectability’.

Other Businesses and Residents within the Yard

There is no doubt that the Parsons family were already letting some of the buildings on the right of the yard, as you went towards the house, even while the school was in operation. As previously mentioned Dorothy let some apartments within Westgate House after the closure of the school but she also let the old school to a joiner. After the death of Dorothy Parsons the executors sold off the whole yard at an auction held at the Swann Hotel in Mansfield at Six O’clock in the evening of Thursday 12th June 1890 , with any sitting tenants.

The Parsons dynasty had come to an end. New owners came in. The house, garden and its accompanying outbuildings were purchased by Mrs Mary Smith Cox, aged 68 as her retirement home. Upon her death her son George, a well known auctioneer and valuer, took up residence and conducted his business from there. He later conducted his business from an office on Westgate but after a few years moved back into the yard, in 1923, into one of the other properties. This business finally ceased in 1958. Westgate House, however, had long since been converted into flats with residents as follows: Mr & Mrs Musson (1938-71); Mr & Mrs Walker (1938-46); Mr & Mrs Dean (1946-63) and Miriam Fareham (1951-53).

By the 1950s most of the yard was owned by the Co-op; they used some of the buildings for their own purposes and rented out other properties. Other businesses included:

From the time that the Reverend John Parsons moved into Westgate House until its demolition in 1973 Parsons Yard was indeed a hive of activity. Sadly nothing but photographs and a few memories remain amongst a scattering of documentation. Now standing on the site of the former yard and buildings are many retail outlets. The entrance to Parsons Yard was situated to the left of the Westgate entrance of the Four Seasons Shopping Centre.

The main feature of this yard was without a doubt ‘Westgate House’. Although this magnificent Gentleman’s home was demolished in 1973 experts tell us that there were traces of Elizabethan architecture contained within its walls, including mouldings and mullioned windows along with oak beams in each room. In the older parts of the house natural stone floors were to be found.

However like all properties it was constantly modified and extended which bit by bit covered up or replaced its original architecture. The last major alteration was made in 1909 when a scullery and bathroom were added to the house. To the rear of the house lay a garden which extended 170 feet and was up to 90 feet in width. The access to the house was nearly 200 feet long; leading onto Westgate.

As the decades rolled on buildings were constructed on either side of the drive; to the front of the house and either side of it, thus turning it in to a ‘Yard’.