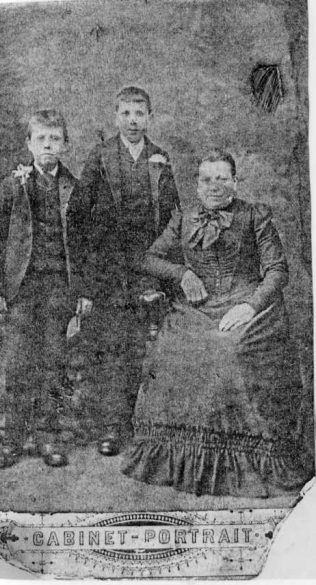 March 23rd 2018 sees the 100th anniversary of the death of a Mansfield man in France, John Ernest Crowder, known as Ernest. He is pictured here with mother Sarah and elder brother Arthur at what we guess to be 10 years of age in about 1890. Ernest was born and lived at Ratcliffe Gate and at age 20 had enlisted with the Sherwood Foresters Militia.

In 1900 he   was in South Africa in the 2nd Boer War, and shortly after arriving became a prisoner at Rhenoster after a 7 hour battle against overwhelming odds. The return of the Sherwood Foresters Militia  was reported in The Mansfield Reporter of 17th May 1901, and I will post the report following this posting. Included in the list of men returning is his step brother Reuben Watson.

Ernest and Reuben were following a long family link with a military life; 100 years earlier his Gt Grandfather William Crowder had joined the Nottinghamshire Militia, and with the “Gallant 45th” had won medal with 13 clasps for his service at several battles in the Peninsular Wars. Again I will post a report of his service separately.

From 1908 to 1914 Ernest was with the Special Reserve, spending 3 weeks each year in training camp. In civilian life he was a rivetter in the shoe manufacturing trade. He married Annie Redfern in 1904 and they had 4 daughters, one of whom was only 2 years old when Ernest was killed in action on March 23rd 1918. He is buried in Queant  Communal Cemetery near Arras, and in 1990 his eldest daughter Edith aged 87 with his granddaughter Maureen found details of the grave and visited it as was reported in the Mansfield Chad