You are here: HomenextTopicsnextEducationnextMusic Lessons with Miss Houseley 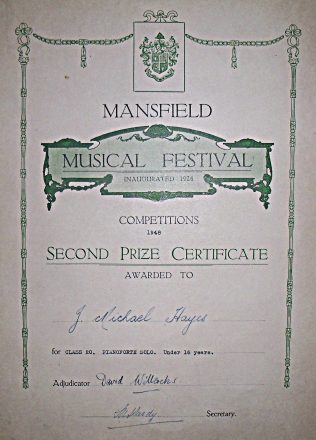 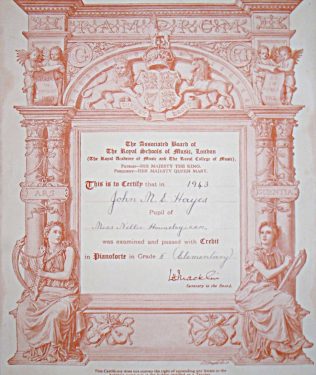 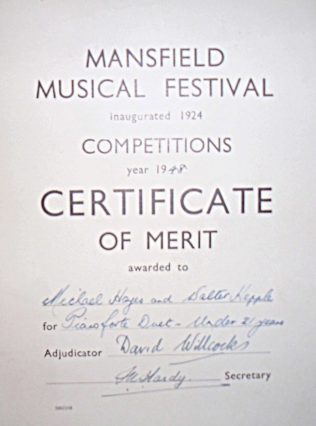 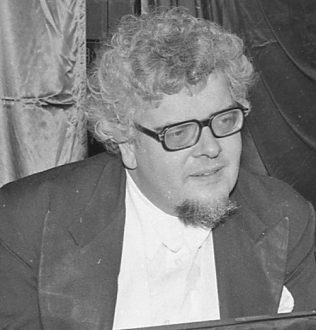 I was raised in Edwinstowe, and am now nearly 78 years of age. I have spent my adult life in S.Wales.

When I first went to her she had studios above, and at the back of Kent & Cooper`s music shop on Leeming Street, Mansfield.

To get to the studio one climbed the elegant and wide staircase on the left side straight in front of the Leeming st. shop door.

The first floor housed most of the pianos for sale and these were hoisted to the first floor through a very large square hole surrounded by balustrade.

There was two rooms and each pupil started their lesson with Miss Nellie`s assistant  – who was usually  Miss Frampton – daughter of the then vicar of St John`s church, to do the basics – scales etc. on a wacky instrument, then passed to Miss Nellie who had a much easier to control instrument.

I don’t recall when but later the studio moved to Market Chambers and had windows overlooking the marketplace.

I made such progress to be asked to take my lesson at The House – this was no1, CHARNWOOD, LAYTON AVE.

The lesson was conducted in the front room (lounge) which had a bay window looking onto the Avenue, and the piano took up most of the space – it was a BROADWOOD BOUDOIR GRAND. I loved to play it because of it`s mellow woolley tone.

During my time under Miss Nellie I took a couple of exams which were not a priority as I recall, and was entered into the Mansfield Music Festival a few times.

I still have the certificates – 2 seconds,1 third  & about 3 certs of merit – I remember being very disappointed at not getting a firstI played solo and duets with WALTER HEPPLE and with MARGARET BARKER.

I’m a family history buff and traced Walter Hepple a few years ago and had a phone chat recalling our experiences. I have tried to trace Margaret Barker – think she married in 1957 to a Colin Boultbee – is she still with us I wonder ! !

I never got near to David Chamberlain, a Nellie Houseley pupil, I do remember seeing and hearing him, and being very envious, practising on the Theatre Organ in the GRANADA Cinema.

Another pupil whose name I remember was Hazel Harvey, remembered because she often travelled from Westgate on the Ebor bus to her home in Woodhouse where her parents kept a shop on the main road.***MH6***

Towards the end of my time under Miss Nellie, taking lessons at the house after school (I attended the Secondary Technical School – 1946-7 at Westgate College, and 1947-8 at the temporary premises on Sutton Road opposite the resevoir), there was often a young boy (I was 14/15 he was about 5 years younger), and sometimes two girls waiting for their lesson.

The boy, chubby round faced and a head full of curly hair would often be ushered into the lounge by Miss Nellie`s father who had been looking after him a short while. Apparently the boy would often arrive with some form of insect life in a matchbox to show to Mr Houseley.

Perhaps during a lessson of one of the girls with four of us with Miss Nellie in the room – one was JUNE  ???????? who lived in FOREST TOWN (Mansfield side of the church) – would be in progress and the phone would ring.

Miss Nellie would go into the hall to deal with the call and the girls would dive into a music cabinet and find the blackest piece, put it on the piano and urge the boy to play it – and he did to my amazement, the boy was Johny Ogdon. I enjoyed watching, hearing him play and talking briefly to him quite a few times.

I left Mansfield area in 1954 except for visits, and the next time I heard of John Ogdon was when he appeared on Hughie Green`s  TV show in about 1959 – I recognised him and said to my wife –  oh that`s Johny Ogdon and had to relate the above story to her.

The MISSES HOUSELEY were three –

I trust the above memories are of interest – I would like to have the “Lesson” story proved by JUNE ?????? She was an attractive girl with a very disarming smile  – I cannot recall whether she was Q.E. or Brunts student.