You are here: HomenextTopicsnextEducationnextMansfield Art College 1969 / 70. 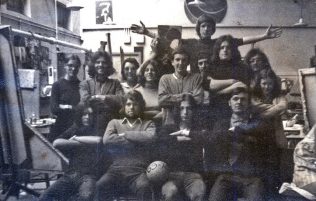 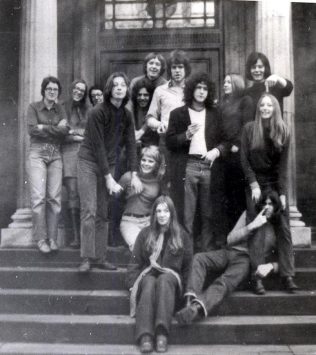 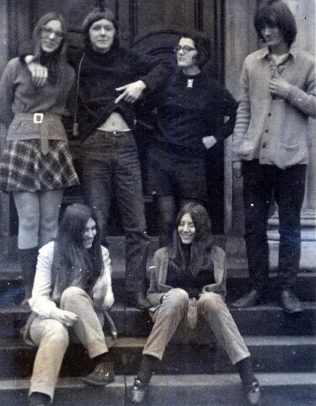 The post-sixth form students here were pursuing the one year Art Foundation Course with a view to moving on to take their Diploma in Art & Design in one of the UK’s major cities, or had not done the sixth form but instead came here direct for the two year B Tech course and (hopefully) go straight from there into the world of “design”. We ourselves didn’t differentiate between each other.

The Foundation course was divided into specialist areas: graphic design, textile design, ceramics (with Bob Gallon), 3D (with Mr Morgan), and Fine Art (with Phil Muirden). The principal was Peter Johnson. It was a very dedicated and effective staff, and it was only years later I saw my tutor Phil Muirden’s work on-line and was able to appreciate how talented and respected a painter he was / is.

The first photo here was taken in the main art studio. To the right of this group was the entrance to the small life-class room. To the left was the exit onto the corridor.

The idiot striking a pose at the back is me, Ian Craig. Back row standing, left to right, is Karen (known for her mini-skirts); Peter Creed (ex-Sherwood Hall with a strong Berkshire accent); Shirley (who introduced me to beat poetry); then a girl I can’t remember the name of but she had a John & Yoko style thing going on with the periscope behind; then unknown; unknown; then Angus from Scotland (very tall, arms crossed, he introduced me to The Who’s Tommy); then  a member of staff in glasses who had once been a student there; then short red haired Hazel(?). Front row seated: Sorry. Can’t remember any names along this row.

In the second photo the three girls on the left are Elizabeth, Karen and Shirley. Ian Craig is on Pete Creed’s shoulders. Angus is pointing down at someone’s head. The corkscrew-hair white t-shirt guy is Roger, and Heather.

In the third photo the back row, left to right, is Karen, Ian Craig, Elizabeth, and unknown. Seated are Sue (?) and Maggie (?)

Apologies for names I can’t remember or got wrong.