You are here: HomenextTopicsnextEducationnextHigh Oakham School 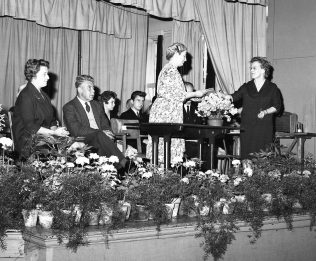 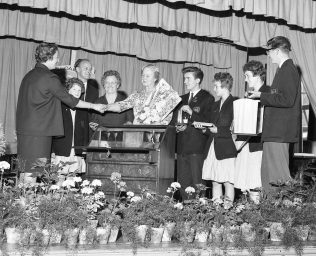 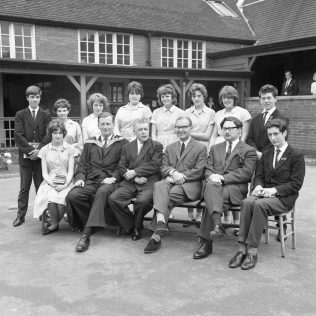 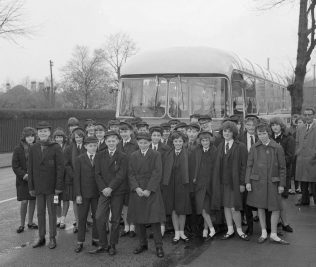 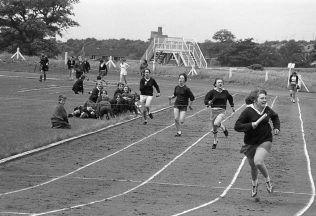 This page has been compiled from memories that had been placed on the ‘High Oakham – History of!’ page, plus photographs from the Museums Chad Negative collection taken a few years later to give added interest.

I attended High Oakham Boys’ School from 1945 to 1948. I was in the class 1AR to 4AR. My first class master was Mr ( Pop ) Paling, A fine teacher who took Maths and Sports, which included P.T. (Physical Training). Miss Slack was the Art mistress. Mr Atkinson was the science teacher. Mr Southern was the Woodwork teacher. Mr Barkes was a very strict Maths teacher. Mrs Smith was the Music and Singing teacher. Mr Copley was the Reading , Poetry, and French teacher. I can see the Geography teacher, but cannot recall his name. Another Music teacher was Mr.Raybold, he lived just at the rear of the school .  Mr. (Blanc) White was the Headmaster. He lived opposite the school on Nottingham Rd. He was a tarter., The Lord help anyone who was sent to him for whatever reason, including if your shoe’s had not been cleaned that day. Pride and Discipline were taught in those days.Mr Fossey was the Geography teacher. Mrs Smith was also the Algebra and Geometry teacher, and Mr (Prigger) Price was also a Maths teacher. Oh…and to other schools , we were known as the HIGH OAKHAM BUCKET BANGERS. Don’t ask me why !!!

I attended the school from 1943 to 1948. Teachers who taught me were as I recall were Headmaster Mr White, Mr Fossey – Geography, Miss Clewley – History, until Mr Copley was demobbed and she left. Miss Hubbard – French who also taught the same subject in the Girls School, Mr Smith – Music, Mrs Smith – Maths, Mr Price – English, Mr Paling – PT & Sport, plus Swiming. Miss Joyce Slack – Art, Mr Atkinson – Science, (who was unfortunately killed when his dog pulled him off of a bus on Southwell Road). Mr Copley who also came back to the school after service mainly in the Palestine Police Force, Mr Southern – Wood and Metal work. There was a Mr Pollard who I believe was replaced by Mr Atkinson or it may have been the reverse situation. I recall Mr Raybould but had no contact or attended any of his classes I also recall there was another teacher with a similar name to Barkes who had a classroom at the rear of the stage in the gym.

I also recall initially there was 1a, 1ar, and 1b the latter being Mr Palings Class, and Mr ? had 1ar.  Mr Fossey had a sixth form for those who stayed on after school leaving age to which I was one. We were based above the cloakroom in what was a library and stores and undertook the School Certificate. We only had one who failed, and he was the one who always came top in most, if not all the subjects we took. Obviously his nerves went. A small number who passed went on to Brunts Grammar School to matriculate in and around 1945 /1946. Several boys came to the school from Kirkby to undertake the School Certificate as their school did not have the opportunity for them to do so. About that time the school leaving age was raised and you could leave school previously when you completed your Fourth Year. Being now in my eighties my recollections are somewhat and obviously a little bit on the blurred side

Funnily enough Malcolm, I do remember you as a schoolboy at High Oakham School. You started there probably a year or two before me. I am not in my eighties until next year. I also recognised you on the picture with Mick Hallows, Barry Heath and co. Just to say that in 1945, Mr Paling had 1AR when I first started there, and if you were good at sports you were well in. I loved it ! Two new teachers came whilst I was a pupil, a Mr. Bagaley and a Mr Moss, who I thought was the teacher who returned from being in the Palestine Police. It stays in my mind because my brother was serving out there at the same time. Sorry that I was not able to stay on for my ” School Certificate “. It wasn’t by choice I can tell you.

Alan, I remember a teacher named Bagaley who must of had the classroom behind the stage in the gym but Moss doesn’t ring a bell. When I started it was Fossey who had 1AR, Paling 1A or 1B. When I was in the Fifth Form it was MR (Prigger) Price. Your name doesn’t ring a bell either I’m sorry to say. Some of those I remember from those days were – Louis Forman who lived on Garnon Street, we knocked about after we were demobbed from the RAF for several years until he got married. Vaughn Watson who came from the Barn Lane area who after time in the Army played for Mansfield Town until transfer to Chesterfield FC and then Matlock Town ????

Hardstaff who was a late comer from East Kirkby and the nephew of Joe Hardstaff who played Cricket for Notts CC and England. Graham Bull from Kirkby ????? Lee also from Kirkby. Brian Doy whose Father was the Manager of the Trustee Savings Bank on Regent Street. Maurice Ward from the Clipstone Road area. Maurice King who transferred to Brunts and was eventually a Lecturer at a College in Derby. Stewart Barker who lived on Carter Lane who was a neighbour and became a Regular in the Royal Artillery. Johnny Abthorpe another fine footballer, who I believe had a short spell with Stags, I believe as an Amateur but emigrated to Canada and who came from the Radmanthwaite area. Albert Davenport who lived in the Southwell Road area It is a pity ones memory at our age is problematic and I sincerely hope more recollections will hopefully emerge.