You are here: HomenextTopicsnextEntertainmentnextCommunity website is a hit in Mansfield and overseas

Community website is a hit in Mansfield and overseas 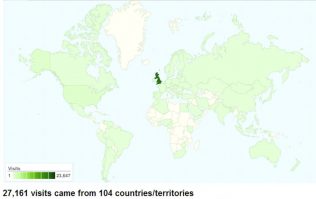 zoom
Number of visitors in the last year

Our Mansfield and Area has seen a huge rise in visits as it reaches its second anniversary.

This site has been developed by local people, with the support of Mansfield Museum and funding from Renaissance East Midlands. It gives people the chance to share their knowledge and photos of Mansfield and nearby communities, both as they are today and in the past.

In its second year, up to 1 November, the site had an amazing 27,117 visits – an increase of 90% on the previous year. This equates to 203,495 individual page views. However, the website isn’t just a hit with locals, people from over 100 countries were interested enough to log on including people from the Seychelles and China.

There’s a wealth of information and photos featured on the website including the last letter from a former Warsop workman discovered in the Mansfield Chronicle Newspaper in 1915, photos of Clipstone Colliery over the years and interesting facts on the lives of Mansfield people who have left a lasting impression.

Executive Mayor Tony Egginton commented: “This website gives a fascinating insight into Mansfield’s history. The information is built by people who have a real interest in the District and its communities, which has revealed some interesting stories that may otherwise have been forgotten.”

People can browse the articles already added, or even add their own. There are also tutorial videos to explain how to add articles and photos to the site.