You are here: HomenextTopicsnextEntertainmentnext1964 And All That 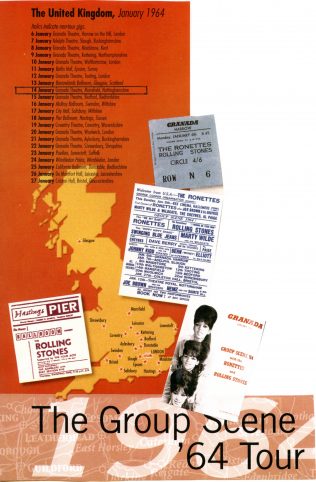 I was a fifteen-year-old spotty adolescent at the time with an admission ticket to see The Rolling Stones at The Granada on Westgate Mansfield – price of ticket 11s 6d!!! – which swallowed up my paper round money……..

The Show was part of a major tour featuring The Ronettes, The Swinging Blue Jeans, Marty Wilde and the Wildcats, Johnny Kidd and the Pirates, Dave Berry and the Cruisers with The Stones headlining Major package tours such as this were all the rage a mixture of home grown talent with the added attraction of an established recording group from the USA all for 11s 6d – about 57 pence.

The provincial tours used small ballrooms and cinemas as venues and were given names such as this one titled “Group Scene 64” this type of venue was very small compared to what is expected today everybody had a good seat and wasn’t that far from the stage in such a Picture House as they were called then. Everybody in the Theatre felt the raw energy of the Dartford version of U.S.Rhythm and Blues that night.

For readers who do not remember The Granada it was were Primark is now.

I have been to many many gigs since then but nothing comes close to this distant memory – I have to add I’ve not seen the Stones since which makes the Granada show special.

Did I mention that I had to leave as the Stones set ended to make sure that I caught the last bus home – cool or what……….

The set list from that night was; Come on/ Mona/You Better Move on/Roll Over Beethoven/I Wanna Be Your Man.

I had missed the early Beatles visits to the Granada – that is for other correspondents to share, but as the quote goes “The Beatles want to hold your hand – The Stones want to burn your Town down” appealing to a fifteen year old oik……

The music scene in Mansfield at the time consisted of the Palias de Dance on Leeming Street / The Disc-upstairs at The Eight Bells and the sadly missed at the time Flamingo Café on Clumber Street – where you could hang out until really late.

Trips to the All Nighters at the Dungeon on Stanford Street in Nottingham were a must to see the very best in recording acts from the States appearing in the UK for the first time Edwin Starr/Ben E King and Clyde Mc Phatter etc were among many others seen there.

Back in Mansfield recording buying was done at a RECORD SHOP not as today people buying records at the same time as their cheese!!!

Syd Booths and Valances (who had a listening booth!!!) were emporiums to visit… incidentally the only format was vinyl – lovely smell – singles were 6s 8d.

The only place were you could buy Levi 501’s and Lee Riders Gold Label jeans was a small gents outfitters on Church Street where the Nat West bank is now – can’t recall the name – they were the real originals and priced at 32/6d [£1.62½] and 30/- [£1.50] respectively

Whilst all this was happening I had started an apprenticeship in Engineering but that is another story for another day………still collecting vinyl though……………………….