You are here: HomenextTopicsnextEntertainmentnextGranada Cinema Mansfield 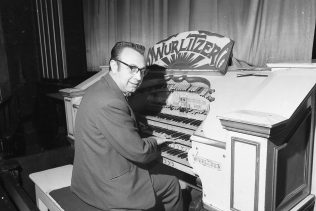 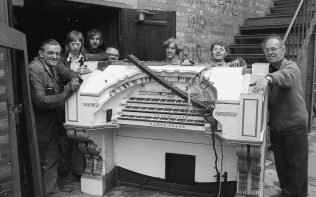 I recently read some history about the Mansfield Granada cinema which said it was opened on the 4th August 1930 as the Plaza Cinema.  In April 1936 a Wurlitzer 3 manual organ was opened by organist Harold Ramsey and the cinema was taken over and renamed the Granada from April 1942.

On the 26th May 1973 the Granada was closed showing the film ‘Young Winston’ starring Simon Ward.

The Wurlitzer organ was removed by ex Granada organist John Madin  of Chesterfield who tried to find a home for it in Chesterfield, but was unsuccessful.

He then sold it to a Mr Graham Fields who had it in a local restaurant which he subsequently sold to purchase a former Methodist Chapel in Matlock where the organ was fully installed and opened in 1995.  The Chapel was then sold when Mr Fields moved to Greece after which Mr Graham Atkinson bought the organ.

A few days ago my husband and I went to the Scarborough Fair Collection which is situated on the Flower of May Holiday Park, Lebberston Cliff, Scarborough, YO11 3NU and if you haven’t got a car, it is on the No. 120 Scarborough/Bridlington bus route.  We were so chuffed to find our Mansfield Granada Wurlitzer organ there in the café/ballroom being played for the afternoon tea dances, and also there is the Wurlitzer organ that had been situated at The Ranch, Sutton-in-Ashfield.  We told the organist Mr Michael Carr that as children we had sung to this very organ at the Saturday morning children’s film shows when it was played by Boyd Oxford.  He said he loves the mellow sound that it produces.  What a history it has, and it’s so good to think it is now giving so much pleasure to so many people once again.  I’m sure we’ll go back again some day to recollect the ‘old days’ of being one of the Saturday Grenadiers as we were called, and to also see the old fairground rides.

Acknowledgement to Mansfield Museum for the photos from their Chad Negative collection.