You are here: HomenextTopicsnextBusinessnextIndustrynextMiningnextMorgan Kingston 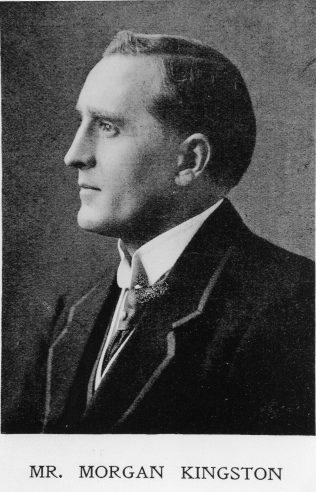 zoom
From a 1912 Programme of a Concert at Long Eaton,via E Gibby 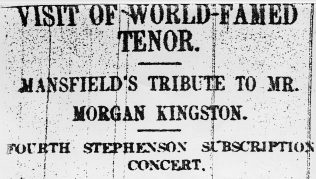 Alfred Webster Kingston was born, 16th March 1875 in Staffordshire, he was the third son of miner, John Kingston and his wife Jane. Before he was six, the family had moved to Hucknall where two more children were born Fred, and Elizabeth. As a young boy Alfred sang in the St John’s Parish Church Choir at Hucknall, he and brother William also sang in the Byron Quartet.. On leaving school Alfred, started work in the coal mine at Hucknall. At the age of 20 he was married to Henrietta May Dignum.

Around 1906 Alfred and his brother William left Hucknall to work at Mansfield (Crown Farm) Colliery. He, his wife, and children lived for many years, on Carter Lane, Mansfield.

Though working as a coal miner, Alfred was often in demand at many local functions as a solo singer. These included events connected with St Lawrence’s Church, such as the ones below.

1907 Alfred Kingston sang at the Victoria Hall, Mansfield, an event organised by St Peters Church to raise funds for the building of the new St Lawrence’s Church.

1908 when the contract for the church was awarded to T. & R. Moore and a fund raising social was held Alfred Kingston sang at the event and he was reported to be in splendid voice, singing ‘Nirvana’ and ‘My Queen’.

1911 the dedication of St Alban’s Church.

Alfred Kingston was encouraged by colleagues at Mansfield Colliery to take up a career in the musical profession. For a number of years, he spent part of the week working on the coal face and the rest studying music and languages in London under Mr Hugo Hind.

His hardwork and the encouragement of friends and colleagues were amply rewarded for in 1909 he made his singing debut at the Queens Hall, London. Albert Davis, William Holland and other friends travelled to London for this great occasion.

This was no doubt the turning point in the life of this colliery worker, for within three years he was singing in America. On September 13th 1913 he made his American debut as Ramades in Aida with the Century Opera Company, New York. Between 1917 and 1924 he sang with the Metropolitan Opera Company New York.

He had left the coal dust behind and made singing his profession. He became a renowned opera singer, singing with various opera companies including the New York Metropolitan Opera Company. He made records for the Columbia Record Company, which are today, sought after by record collectors.

At an unknown date in Alfred’s career, the name ‘Morgan’ was added to his name and he became better known as Morgan Kingston. Supposedly the name ‘Morgan’ had a Welsh ring to it, and Welsh miners are noted for their singing.

He returned to England around 1924 where he sang in London at the Convent garden opera. His appearance over the next few years included the Stephenson Subscription Concert in Mansfield on 24th February 1926, when he was welcomed by the Mayor (councillor E B Hibbert).

and the late J. Wakefield