You are here: HomenextTopicsnextEducationnextSherwood Hall School for Boys. 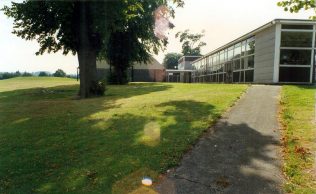 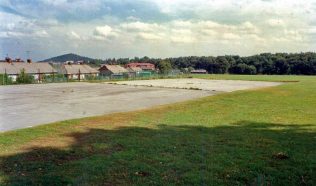 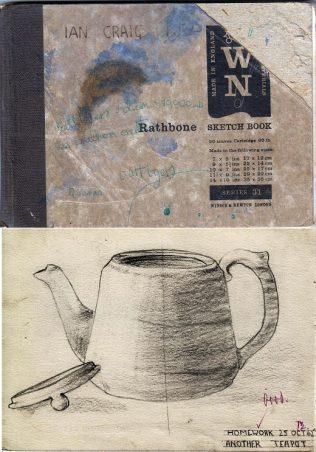 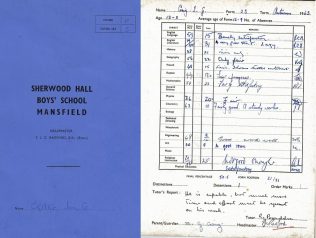 The three photographs of Sherwood Hall School were taken in 1989. The first shows the drive up to the main entrance doors, which in the 1960s opened up onto the assembly hall on the left, the reception slightly to the right, and the headmaster’s office to the right after a short flight of three or four steps. The block to the left of the picture catered to woodwork / metalwork. (I think it was woodwork this side and metalwork the other, with a courtyard in between). The block on the right of the photo was mostly sciences, and a small prefect’s room was also on the ground floor therein.

The second photo is taken from an eastern viewpoint of the path alongside the art room, then the metalwork shop, before reaching the large “barn” behind those trees. In the 1960s this was a corrugated structure, used for games lessons when the weather was poor, and break times in general, when all the boys were expected to stand outdoors regardless of the weather and prefects would patrol the corridors to ensure we did so.

The third photo is of the tennis courts. I think these were better fenced off in the 1960s, and the grassy bank across the centre of the picture was a favoured spot to sit in small groups and chat.

In the early 1960s you would have been issued with a small 7” x 5” sketchbook in which to do your art homework. Seen here is a typical homework task of the day. Mr Cook would teach us all how to construct an ellipse and shade a curved surface. We would then have to apply that knowledge to a designated object at home. Mr Cook (“Cookie”) always marked homework in purple, the colour which always matched his tie. Classwork was similarly restrictive rather than expressive. He would give us a theme to go home and copy encyclopedia pictures for, then draught that same image out in class, add some lettering, and paint in using quality designer’s gouache. In the 1960s the main purpose of technical / grammar schools had less to do with “social mobility” (the current buzz phrase in 2016), and everything to do with finding draughtsmen, architects, engineers, etc.

Pupil’s received three school reports a year: Spring, Summer & Autumn. (In the sixth form the cover changed to yellow.) On “report days” there were no lessons. We would sit in tutor groups for the day(s), reading in complete silence, whilst the tutor sat at the front writing reports for all his classes. These report books would then have to be circulated to other teachers as the day wore on, there being no detachable single sheets. Stereotypical comments such as “Satisfactory” or “Could do better” were commonplace, a practice teachers would never get away with today. Neither would “form position” be permitted now.

I hope these pictures might be of use to people as time goes by.