You are here: HomenextTopicsnextEducationnextMansfield Museum 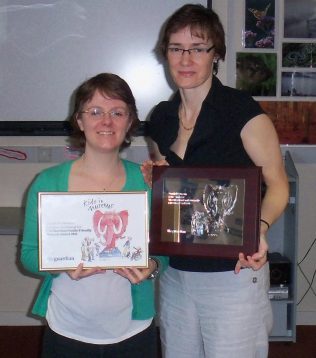 Towards the end of March, Mansfield Museum staff heard that out of 100 applicants they were in the last six for the award. The others were:-

The Potteries Museum and Art Gallery, Stoke on Trent

Just to get this far was a time of great excitment and achievment. Staff then lived with the knowledge that unknown judges with families would visit the museum and assess them as part of the competition.

On Thursday 7th April three members of staff and Cllr. Kate Allsop travelled to London for the Guardian offices for the Award Ceremony. It was a nail biting time for them all especially as it got to the moment when they said “and the winner is?” – when Mansfield Museum was announced the tension turned to euphoria.

Back home we all waited with baited breath, until the fantastic news came to us via, twitter, face book, email, telephone and Radio Nottingham. It is a very well deserved award for the museum staff who put in so much hard work with all their exhibitions, display and events for people of all ages. The work they do with young people is amazing – just visit when a childrens event is on!

An extract from the Official Press Release tells you more about both the musum and the award, read on:-

‘We bet you can’t guess which museum has been chosen by visitors as the most family friendly in Britain.  It’s small and has – to be honest – an unpromising collection, including displays of 19th century Porcelain and glass cabinets of stuffed animals collected by a local dignitary in the early 20th century.  Yet Mansfield Museum in Nottinghamshire has used imagination, innovation and case loads of enthusiasm to beat off its rivals in the six-strong shortlist and win this year’s Guardian Family Friendly Museum Award.

‘Mansfield Museum was a surprise to us.  From a Guinea Pig trail to turning the museum into an old fashioned department store stocked with their collection of household goods, they’ve proved you don’t need an architecturally astonishing building or Egyptian mummies to entice and entrance families.  And it’s fabulous that the local children’s choirs practice there.  It turns the idea of a museum as a quiet place on its head.  You go to Mansfield Museum to sing your heart out!’ says Dea Birkett, Director of Kids in Museums.

‘The museum has a happy family feeling,’ said Karla Lessingham, who visited with her son Aidan, 8, and her daughter Nadia, 5, as one of the family judges.  Each shortlisted museum was visited anonymously by families, who reported back on the family friendliness they found and picked the winner.  The Lessinghams are the first of family judges to have visited all six museums on the Award shortlist, from Kilmartin House in Argyll to Corinium in Cirencester.

Family judge Jackie Shears, who went to Mansfield with her three children aged between eight and three, liked the low-tech interactives and that the kids could sit down and colour in every single room.  She only had one complaint.  ‘There was no loo roll in the Gents!’ ‘

The Museum has been congratulated by museums and people far and wide to discover more look at: