You are here: HomenextTopicsnextLeisurenextKathleen Cox 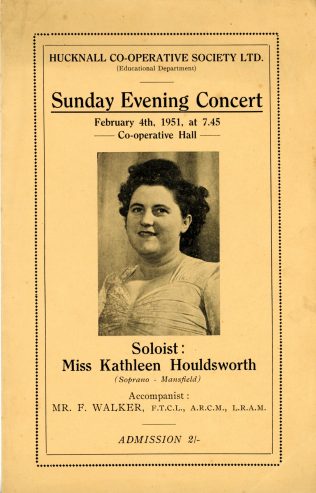 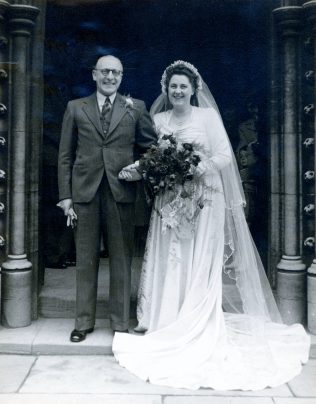 zoom
Kathleen and Sydney were married in 1948 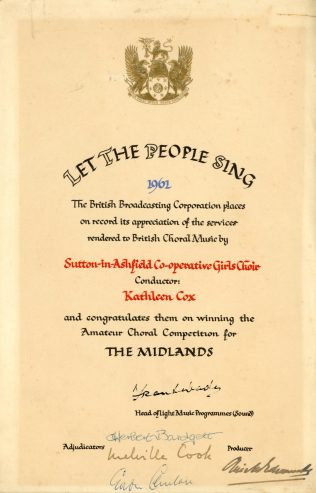 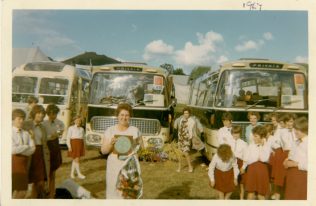 zoom
Kathleen was proud of the Choir's success at the Eisteddfod. 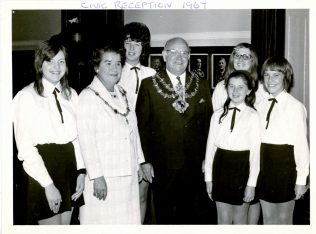 zoom
This was from the Civic Reception when the Girls' Choir won the 1967 International Llangollen Festival. 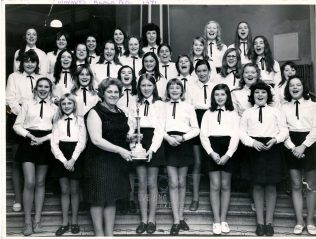 zoom
The Choir was successful at Blackpool in 1971 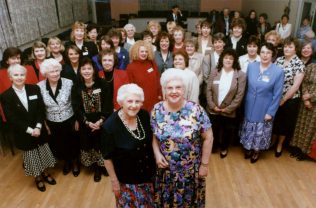 zoom
This was a reunion held in 1997 for all of the past and present members of the Girls' Choir. 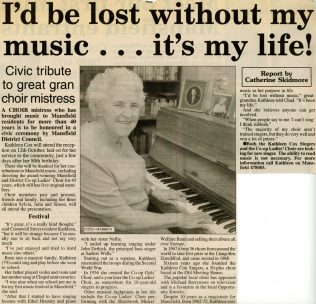 Kathleen Cox was the founder of the Mansfield Cooperative Girls’ Choir and
director of several choirs over her illustrious 80 year career singing in
Mansfield.

She was born Miss Kathleen Houldsworth in 1920 in Mansfield. Her love of music was a family trait, as her father played instruments and her mother sang at Chapel anniversaries. Kathleen was 9 years old when she performed in her first music festival. She took singing lessons with Ethel Housley and piano lessons from her sister Nellie. Additionally, she sang under the great John Dethick. Kathleen performed for the troops during World War II and gave many solo concerts.

Kathleen married Sydney Cox in 1948. They had three children: Simon, Sylvia and Julia. They were a musical family; Sydney played the piano for Kathleen’s concerts, and her daughters sang in the choirs. Kathleen and her family were very community-minded, and in 1950 she had the honour of being invited to the Reception of Her Majesty the Queen during her visit to Mansfield. Queen Elizabeth visited to open the Portland Training College for the Disabled.

The Mansfield Co-op Girl’s Choir’s biggest triumph was winning the 1967 International Eisteddfod at Llangollen in Wales. They won £100, a trophy, and were given a civic reception in the Town Hall. This was Kathleen’s proudest achievement. The Girls’ Choir beat 34 international groups, and an adjudicator was quoted as saying, “It was not a performance; it was an experience.” The following year the Girls’ Choir improved upon their own score, but placed second at the same festival.

She was very busy, but Kathleen managed to find time to be both a Justice of the Peace and a magistrate in the 1960s and 1970s.

To further share her love of music, Kathleen formed other choirs. She founded and played piano for the Happy Wanderers, a small female choir, with her daughters. They performed for free at community events. She also formed the Kathleen Cox Singers for the over-50 group in 1986. This choir won certificates and awards.

Kathleen received the Chairman’s Award and was honoured by the Chad for all of her work in the Mansfield community.

Kathleen retired in 2004 and the Girls’ Choir disbanded, as no one could fill Kathleen’s big shoes. Her legacy is impressive, as she did much for music in Mansfield. She once said, “Music is my life!”, and it is clear that it was.

Sadly, she passed away in 2016 at 96 years old. Her children continue to honour her legacy and are proud of their incredible mother.

Please click on the link to hear Kathleen’s solo performance of ‘Because’ https://youtu.be/jrHTBacaA5U