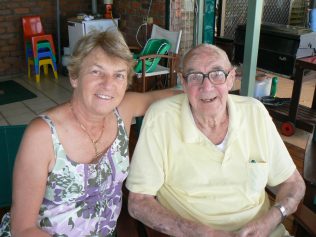 zoom
Cyril and his daughter 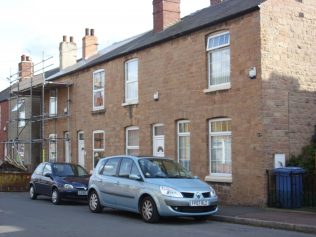 zoom
The cottages on Mill Street

In late 2008 the Museum was contacted by Cyril Knowles in Australia, asking whether Mill Street still existed.  He had been born there and was wondering if the house he had been brought up in was still there.  We took a photograph of the house and emailed it to him and this started an ongoing correspondence.

He started sending us his memoirs, chapter by chapter, which we compiled into the attached ‘autobiography’. When completed we sent it to him so that he could share it with his family.

Sadly, Cyril passed away on 23.02.11, but this document remains as a reminder of his life.

Here is Chapter 1 as an introduction.

I was born on the 16th July 1923 at number 21 Mill Street . My father was a coal miner at Clipstone Coal Mine and my first memory was of Dad coming home from work black as the Ace of Spades, sitting in a big tin tub being scrubbed by Mam. The house we lived in had no bathroom and Mam paid 9 shillings per week rent to a miserable landlord named Mr Shaw. Dad had plenty of work until that awful day in 1929 when Wall Street went broke. Dad, like every other miner was sacked and put on the dole, it was an awful shock at 6 yrs of age. I did not understand and I got sick with lack of food, I was sent to a special school called Berry Hill Open Air School and got free milk every day. This built up my strength and allowed me to join Carter Lane School , after that I went to Ravensdale High School . However things were still very bad as Dad only got 29 shillings dole and out of that he had to pay 9 shillings rent.

Please click on the link to read the complete story of Cyril’s full and interesting life.