The Life of Arthur Wright 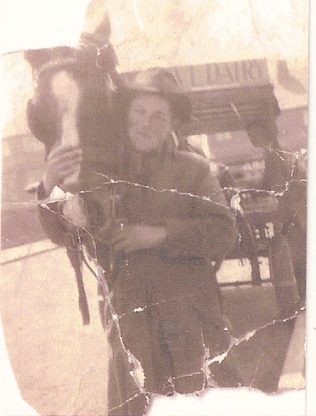 I was born on the 21st May 1926 on Montague Street , Mansfield . I started school at Carter Lane Junior School and then moved up to the main school when I was 10 years old and then on to Ravensdale in 1936 and I was there when war broke out. I left school in 1940 and worked on the Co-op milk round, when it was still a horse and cart. The stables were up a yard on Westgate. The shop at the bot tom of this yard was I think called Burton ’s clothes shop. This area is now the Four Seasons Shopping Centre. Another yard in this area went to the Co-op slaughter house and came out on Stockwell Gate.

In 1942 I was an ARP messenger boy and had to report to a place at the top of Ratcliffe Gate, near Fisher Lane . This is now a park near Windsor Road . During the war we would stand in our bedroom windows and watch them bomb Sheffield . We had an evacuee from Lowestoft who we kept in contact with for many years after the war had ended. During the bombing raids over Germany the skies were black with aeroplanes.

I married Olive in 1952 at St Mark’s church and we had three children. I now have 4 grandchildren and 4 great grandchildren. Before were married my late wife lived at Bleak Hills cottage which is now a big house.

A few things I remember about old Mansfield .

At the side of the old Granada on Westgate was a fishmongers shop, a little higher up was Copstakes a cake shop and Barretts sports shop.

On Stockwell Gate was Gunners china shop also the Co-op restaurant and a butchers shop.

I also remember there being a church on Gilcroft Street and the empire Cinema was on the corner of Rosemary Street and Sutton Road . The Empire cinema and The Rock both showed the Gaument British News. When we had been to the Plaza on a Saturday night my Dad would take us to Gelesthorpe fish shop at the bot tom of St James Yard.

At the end of Great Central Road was the LNER railway station where we boarded the train to Skegness.