My Quest for Jenny Beckett 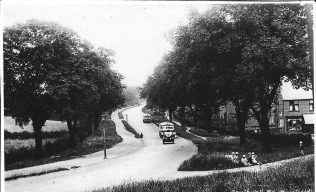 No one in the past has been able to identify Jenny Beckett who many years ago had a lane named after her in the town of Mansfield and I myself have spent many years of study trying to reveal the truth of this elusive lady. There has long been guesswork and rumours that Jenny Becketts Lane was named after someone who was murdered and lived in a cottage on the lane but checking all the old maps we find there was no such cottage at the time when the name Jenny Becketts lane was already so called and houses were not built there until 1925.

The earliest reference I have found to Jenny Becketts Lane being so called is in a Nottingham Evening Post article of 1894. In the 1841 Census there were no Becketts listed as living in Mansfield or Woodhouse. I have searched right through Mansfield Parish Register from its beginning in 1559 and there is no trace of her being baptised, married or buried. I have also checked surrounding registers and other archives, if she was a Mansfield resident and had been murdered or otherwise died I would expect her burial to be recorded in the Parish Register but there is no such detail.

There is no report of her murder in the newspapers of Nottinghamshire which begin in 1714 or any other archives but some have referred to Nottingham Journals report of 1784 which states that George Paulson of Mansfield convicted of robbery and sentenced to transportation to America became ill on ship and confessed before he died that he and James Buxton had murdered a woman near Mansfield but as he did not give her name it cannot just be assumed that it was Jenny Beckett.

So who was Jenny Beckett? Some Becketts begin to appear in the Mansfield Census 1851 onwards but non have a daughter with the right name, as previously mentioned she does not seem to have been a native of Mansfield so where was she from ? I have checked surrounding parishes and found Becketts or Beckitts were a Southwell family which is about 11 miles from Mansfield probably three and a half hour walk and the same road that comes from Southwell passes by the lane in question, in those days it was normal to walk that distance.

The Southwell Parish Register gives the most likely candidate for the unfortunate lady ie – “Jane Beckitt daughter of William and Ann Beckitt baptised at Southwell in 1746”.

Unfortunately for some reason not given she was buried at Southwell at the age of 18 in 1764. Its unusual for a mature single girl of that age to have died of natural causes so it may be the case that if some tragedy had befallen Jane / Jenny Beckett murdered or otherwise just off Southwell Road in Mansfield at the place now named after her, her family would have come to take her home to be buried in her own Parish which would explain why there is no record of her in the Mansfield Parish Register.

It is possible that Jane Beckett was known as Jenny and was visiting Mansfield and that particular part of the Southwell Road now named after her was the unfortunate end of her young life. She could have fallen fatally from a horse or got caught in a snowstorm and froze to death which would explain why there is no record of her murder.

After much research I now conclude that in my opinion Jenny Beckett was born at Southwell in 1746 and her life ended at Mansfield at the age of 18 in the year 1764.