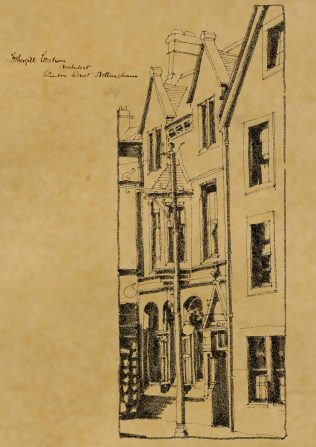 Watson Fothergill is known as one of the two key Victorian Architects of Nottingham, his buildings being instantly recognisable. This reputation is based, to a degree, on a handful of key ‘signature’ buildings in the centre of Nottingham built during the 1880s and 1890s – Queen’s Chambers on the Market Place, Jessop’s shop on King Street, the Rose of England on Mansfield Road, his own office on George Street, etc etc. These buildings are all distinctive – eclectic in nature, with a mixture of red brick, stonework and blue brick banding, dark timberwork, gables, turrets and chimneys – and represent the architect at the height of his career.

However, as a new book reveals, Fothergill’s early career was dominated by his connections to Mansfield. During the 1870s he would design at least eleven buildings in the town (of which eight still survive), he would act as Consulting Architect to the Mansfield Improvement Commission (where his half-brother, Robert Mackie Watson, was chairman); and, through his wife, would inherit a significant proportion of the shares and property of Mansfield Brewery. Even in later life his connections back to Mansfield would be important, as it would be through his half-brother that he would be appointed as surveyor and architect for the Brunts’ Charity, going on to design the famous and much-missed Black Boy Hotel.

Fothergill’s earliest works in Mansfield are not particularly well known.

The earliest building attributed to Fothergill Watson in Mansfield is the former Bank for the Nottingham and Nottinghamshire Banking Corporation dating from 1874. The structure still survives and is identifiable however the building became amalgamated with the adjacent Swan public house in 1910 and it’s ornate frontage was removed and rendered over at some point during the mid-twentieth century. At the time it was built it was considered very grand for Mansfield, with the description in May 1875: “The new buildings in Church Street are rapidly increasing to completion, and will give an entirely changed appearance to what has hitherto been one of the poorest streets of the town. The Nottingham and Notts Bank promises to be very ornamental and the fact that the Directors have thought well to spend so large a sum on its erection is a marked indication of the increasing prosperity of the town. It is gratifying to see the architectural effort made in this building.”

Following on from this Fothergill would design the shops at the rear of the Town Hall (now used by the Council); a shop on Albert Street (the offices of Harrop White Vallance and Dawson solicitors); and the Kings Arms on Ratcliffe Gate. His later works, such as the Cattle Market are more well known and in many cases are Listed.

It is hoped that through greater recognition of his works of Mansfield, these important early buildings can be given the protection they deserve.