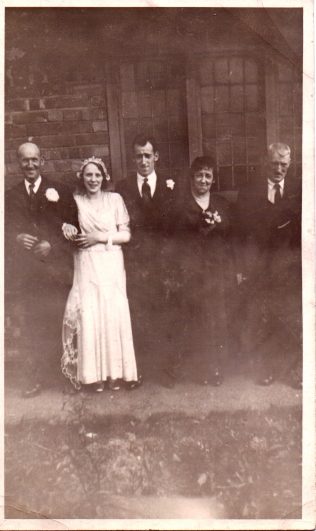 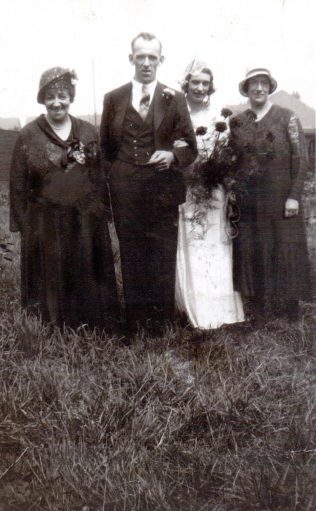 My aunt Flo , my fathers eldest sister, lived in the Brickyard  as it was known by all the locals, plus all and sundry. That was because of the old Brickworks that stood there for many, many years.  I suppose it was chosen for it’s location for the closeness of the sand, cement, clay, and coal, that lay in abundance all around. Oh, and I believe the main rail lines running by it’s side had something to do with it too, thus, it was always called the Brickyard when bricks were produced there, and the name stuck even after the brick works closed, which I believe was sometime in the early 1930’s maybe sooner.

The were plenty of people (workmen), who lived in the close proximity. Moor Street, Victoria Street, Princess Street,  Bradder Street and the like. However, there was another two blocks of terraced houses built at right angles, so as to close the brick works in by surrounding it with housing. One set of old stone houses was known as The Ten Row to the locals, this ran parallel to the railway lines. The other was a row of brick built terraced houses, probably built from the bricks produced by the brick works. This was named Victoria Terrace. It was during my young life my Aunt Florence and Uncle Lawson  lived in one of these terraced houses, number 6 to be precise. Whether it was meant to be or not, the backs of the houses faced the old Brickyard . Same as most terraced houses, the toilet, coalhouse and dustbin covers were at the top of the yard near to the works. it must have been lovely living there, for the front door faced the hay field, separated only by a very long garden and a small stone wall.  There was a shop at one end near to the old wooden footbridge over the railway lines, and at the other, a Working Mans Club, very popular in it’s time. Of course, the old Saint Aiden’s (Tin ) Church was overlooking the whole scene.

Whilst I think about it, there was, during the War one of those brick Air Raid Shelters built where the old brick works stood.

When I was born, in 1933, my aunt and uncle lived at number 6 Victoria Terrace. But they did not always live there.

Florence Curtis was born in London In 1881. To be exact, she was born at number 4 Bovey Street, Islington. I very much doubt if you could find it today, for I believe it was blitzed during the second world war..

The first born child of Alfred and Martha Curtis, she grew up a member of a  God fearing family, she grew up the kind of person, helping and looking after everyone in life who was down on their uppers. A lady, like my father, always kept her southern London accent as long as she lived.

From London, the whole family moved to Cambridge, living and working in the centre of the town , the house they lived in was also called St Andrews Yard, where the family both lived and worked. Running a Horse and Carriage business. The yard is now demolished after making way for a new Shopping Centre..

Whilst Living in the family home, Florence met  David Lawson Storey, who was also  a resident of Cambridge,  They were Married  in 1899, Most of their offspring’s were born in Cambridge during the early part of the 20th Century.

Lawson was a do anything kind of workman, but some things he was particularly good at, farm work, woodman, and cleaning all kinds of chimneys. Coming home from chimney cleaning, he was blacker than any coal miner. He, like many others of that day would lay their hands to any kind of work to feed their family.

The Move To Mansfield.

I guess it was 1910/11, Aunt Florence and Uncle Lawson made their move to Mansfield, where I am sure it was the work that made them decide their move to the Midlands.. The house they moved into was the number 1 Quarry Lane. Having lived in Mansfield for many years, I knew there was only one building of any kind of dwelling on the river side of Quarry Lane, and that was the old corn mill, surely it must have been the old mill. I never actually knew  where the old corn mill stood, I did know where the old remains of the old dam lock gates were, and I knew where the old Freestone Cottages were on the other side of the river. Nevertheless, over the years my Aunt Flo confirmed where they used to live on Quarry Lane. I am so pleased the 1911 census also confirms the address of number 1.

One of the Duke’s Gamekeepers.

It could well have been the kind of work Lawson was an expert at, for he came to work for the Duke of Portland , first as a woodman,  then as told to me by my Aunt Flo, he was a Gamekeeper for the Duke of Portland. I, as a youngster, loved going to their house and looking at both the stuffed Woodpecker and the stuffed Owl, both in domed glass cases in their front room. I also loved the lemon curd tart I was given to come home with.

When Lawson grew older, as many old people did in those, what to me were the olden days, they spent their hours sat in front of a roaring coal fire, the chair they sat in was usually an old rocking chair with a soft cushion to rest themselves with, often smoking or sucking on an old pipe of tobacco.. The room was on todays standards, quite a small living room, which helped keep the place warm. I also remember the big Redifusion Speaker above the back kitchen door. Thinking about it, just about all the terraced Houses had small living rooms.

I know my Aunt , thoroughly enjoyed her large allotment type garden, for the vegetables she grew, would win any cabbage club competitions. She even kept chickens in a large compound of wire netting, which included a large-ish  coup, ( If that is the right name ) for their night safety. There was always a clump of Rhubarb in the garden.  I well remember dipping and eating a stick of Rhubarb when dipped  in what bit of sugar we had in an old piece of newspaper.

It was my Aunt Flo who told me of my Father saving a man’s life from the Brickyard Pond.

Exploring Over The Wall.

We now come to something that has bothered me for years. My Aunt Flo always told me that before they moved to the Brickyard, they used to live on Quarry Lane. But on the river side of Quarry Lane, pretty close to the bottom of Sibthorpe Street, and Urica, I have recently found it. The proof lies in the 1911 census. For it was the only house on the riverside of Quarry Lane, makes me wonder if it could have been the house that the owner of the corn mill lived, Mr Drury.

As a youngster, walking along Quarry Lane, near to the two houses that Fatty Mann and next door lived the Burbridges’, it was opposite the pair of semi’s , the stone wall rose from 4 ft. up to at least 6 ft.. It was here that the stonework showed a filled in doorway that had been filled in with stone in an effort to replace a doorway. Before the doorway was blocked up with stone , there used to be a very old wooden door that had been nailed up to stop any entrance being made. Over the wall and replaced doorway there were two or three large stone steps that stepped down to what was left of an old dwelling. There was a raised floor that had been left from a building that had been cut down to the floor base  From the floor level there was quite a big drop  to the river embankment.. It was here that a further stone wall held the allotment and building from any movement towards the river .. It is believed that when living there, My Aunt and Uncle had the Allotment that started from the Bottom of Bradder Street, over the stone wall up to the bottom of Sibthorpe Street..

I am not sure when the move to number 6 Victoria Terrace actually took place from number 1 Quarry Lane. An incident happened that I can only make out that the move took place between 1911  and 1914.

Just about all Flo and Lawson’s children had jobs in all kinds of occupations, I do know that Louis, at the age of  14 was working down the Pit. Unfortunately there was an accident which Louis was involved in. It was the day before Christmas Day in 1918 when he was run over by a pit coal tub. Louis died the next day, Christmas Day.  From  that day onwards Florence and Lawson never celebrated Christmas  again. Ever..

My Aunt Flo and Uncle Lawson, lived through two World Wars.. So ten years of their lives were spent scrimping and saving, both to feed their family and themselves. I know what it was like living through the second world war, but to live through it twice must have been horrific. My Aunt Flo must have been made of some stern stuff, for she never appeared to let anything get her down.

I am very proud to have belonged to a family of such kindness and helpfulness to their fellow man. I have never heard anyone say a wrong word about them. I know it was not always milk and honey for them, but they never grumbled, they just got on with things.

Being the age I am, It is amazing how noticeable the offspring’s of the Curtis family carry the trait and the kindness their ancestors possessed. Many have done their duty for the country. All of which I am very proud.