My Quest for Kate Moody 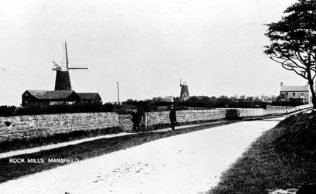 In recent years people of Mansfield have often wondered who the person was whose name was given to a certain road just on the outskirts of town entitled “Kate Moody Lane” which in the year 1935 was changed to Windsor Road at the request of the new residents who wanted a more upmarket name for their area.

There were some families by the name of Moody living in the town but on searching through the parish registers, census returns, archive departments, street directories and other sources the only contender for Kate Moody is an entry in the Mansfield parish register of September 2nd 1739 when Catherine Denton alias Moody has an illegitimate son baptised which was buried some two years later. The name Kate is an abbreviation of Catherine so here we have Kate Denton also known as Kate Moody.

After her illegitimate child died there is no further mention of Catherine Denton alias Catherine Moody in the parish register either a marriage or reference to her being buried, so why and where did she disappear to? Could it be that Kate Moody committed suicide on the lane later named after her and if so in those days it was considered to be a crime against God and she could not be given a Christian burial or be buried in the hallowed ground of the church. Suicide cases were buried at crossroads on the outskirts of town and there are crossroads at both ends of that particular road. No doubt that Kate Moody alias Kate Denton had gone through a traumatic time as an unmarried mother and in those days was probably ostracized by the church and the community which could have possibly caused her to end her life, we shall probably never know for certain but there is no other Kate Moody recorded anywhere at Mansfield other than the parish register entry of 1739.