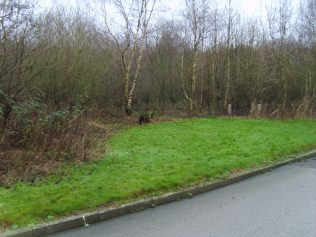 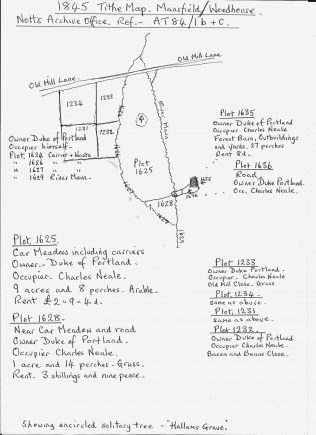 “Hallam’s Grave”. (by David Clay).
“Hallam’s Grave” is located on what is now Severn Trent Water Board land on Old Mill Lane.
It was mentioned in Grove’s book History of Mansfield published in 1894, he knew of its existence but had no substantial knowledge of its past. It would appear that no one has ever took a close up photograph of the grave as the whole Water Board site has been securely fenced in with no public access since 1910 when the Duke of Portland sold the land for the sum of £5,500 for the building of a new sewage works.
After making enquiries I have recently (2016) been given permission by the management to
investigate and photograph the historic site. The mound known as “Hallam’s Grave” is just a few yards from the River Maun and has in times past had a small wire netting fence around it of which the dilapidated remains can be seen in the undergrowth surrounding the mound and also there is the decayed remains of the tree that once stood there encircled by the fence. On the 1804 Duke of Portland’s map at Welbeck Estate Office there is nothing at all marked on the site at that time but by the time of Sanderson’s map in 1835 a solitary tree is shown at the location, ten years later on the 1845 Tithe Map the tree is shown with what appears to be a circular fence around it and by the time of the 1877 map it is named as “Hallam’s Grave” and also the same name is given on further up todate maps.
The evidence seems to point to someone being buried at the side of that tree around the 1840s and a fence put around it. It would not be allowed for a person to be buried on a piece of land belonging to the Duke of Portland without some special permission. Mr Charles Neale was the Steward and Land Agent for the Duke of Portland and he was also the occupier of the land on which “Hallam’s Grave” was placed. On the 1845 Tithe Assessment he occupies the fields at that location on both sides of the river. Its documented that his family were connected by marriage to the Hallam’s, also Charles Neale’s sister Ann Neale was married to a Joseph Hallam. Charles Neale had much correspondence with the Duke as shown by archives of the time and also attended many meetings with the Duke which no doubt led to him being given special permission for the grave. Charles Neale was born in Cotham in Nottinghamshire in the year 1790 and became a very wealthy man and at the time of the 1841 Census he employed 8 labourers, 6 boys, a cook, a maid and a groom. Its not known which one of the Hallam family is buried at the mound but no doubt it was someone connected to the family of Charles Neale.
If the historic site is to be preserved the fence around “Hallam’s Grave” needs to be re erected and some marker placed at the location before it becomes lost forever, perhaps some local historical society could with the right permission undertake the project.