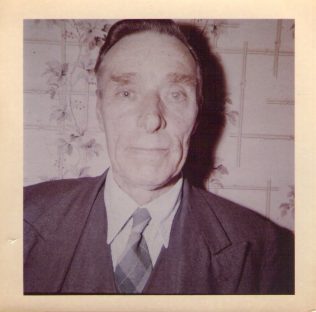 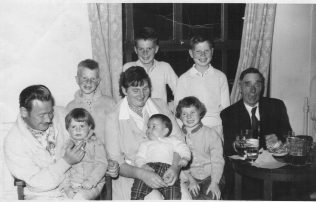 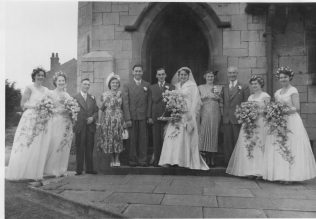 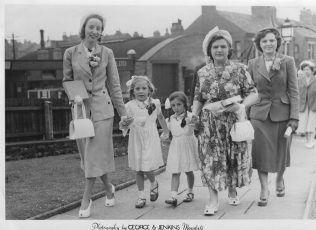 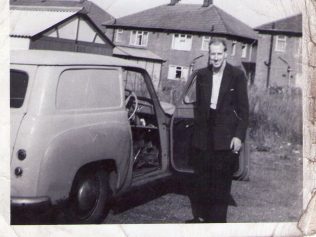 This info comes from my distant memories (so may not be entirely accurate . . L.o.L ) of conversations with my Mum. She passed away aged 59 in November 1989.

Sam had 5 children to my knowledge. The 2 boys were named Carmel and Hyla. The girls were Clarice, Marjory and Hazel (Hazel Mary, my mum). Mum was born September 30th 1930. I don’t know her sibling’s dates of birth, I rarely met them. She didn’t remember much of her natural mother who had died. Her Stepmum was named Lena (perhaps short for Selena ?). (see Wedding photos)

Picture of Marjory and Family with Grandad

Marge and Jim Noble with their children, emigrated to Australia, if I remember correctly, there were 3 boys, Dale Gary and ? and 4 girls, Valerie Janet Lynn and Tina.

Carmel became a Pub Landlord in Nottingham, (Woodboro’ Rd, I’m sure of that, I visited once). I vaguely remember his son Ricky.

Hyla settled in Kirkby in Ashfield and had 9 children with his wife Lilian, I’m still in touch with one of his daughters, my cousin, Jane Mugglestone.

Clarice lived either on Stella or Talbot St, off Nottingham Rd. I don’t know much more than that.

I have no pictures of Clarice, Carmel or Hyla.

Sam Austin (3rd from left). Next to him I think, is Lena. Maybe it’s her daughter or sons marriage?

Same wedding. My Mum on far left. Lena (I think) second from right and maybe her sister next to her ?

I thought it was around 1965 that Grandad (Sam Austin) was coming to Skegness with us for a week in the old Commer Cob van that we had recently acquired. It was delivered to Ladybrook from Nottingham so I reckon Grandad must have had a hand in it somehow.

As we were about to leave for Skeggy he said he felt ill and decided instead to visit his son Carmel in Nottingham. I thought he passed away there soon afterwards but just this morning, as I write this, I’ve discovered Freebmd.org.uk which lists only one Samuel Austin, who aged 73, died in Nottingham in Dec 1964.

The Commer Cob van that I think Grandad bought for us. Our first, 4 wheeled transport.

Dad had just recovered from a hip operation (at Harlow Wood I think) which left him severely disabled, (hip replacement as we know it today wasn’t available then) also, he hadn’t driven anything with 4 wheels since the War Ag days.

Here he is practicing on Pye Avenue garages. (Ladybrook)

Ten years after Mums death, realising that we (my 2 brothers and I) knew very little about our own family, I got my Dad writing his life story. It was surprising. It’s amazing what you don’t know about your own parents young lives.

In due course I’ll post his story on a page titled Harry Marcus Stevenson.

Best Regards to All