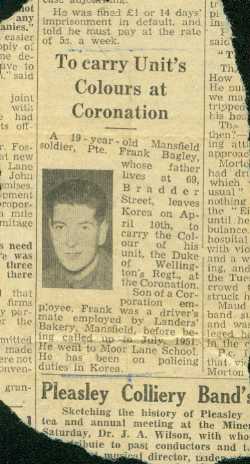 Frank Bagley was my friend , Army mate, School friend , Work Mate, Football team colleague, and next door neighbour until the days we both met the young ladies whom we married.. We were like two brothers that were joined together at the hip, colloquially speaking..

I , living at number 67 and he at number 69 Bradder Street… I feel that I owe Frank his page in the history of our Mansfield, for in his short life, he packed so much into his service and representation of his life and upbringing in our town. His Father was a miner, who was a casualty of that dreaded disease Silicosis , he was one of those who spent the last years of his life, leaning over the front wall of home, gasping for breath..

Frank was born in Mansfield on the 6th of June, 1933, and for those whose mental arithmetic is better than mine, Frank would be 83 this year.. Living on the street the same time as I, he knew all the same people I knew in those far gone days.. Which, incidentally, included the hard times of the World War Two years of 1939 to 1945..

The two of us started at Moor Lane School together in 1936, I believe it was Christmas time, for at the time, you could start school as soon as you were able.. In order to get their children into school, parents would often exaggerate the age of the child.. Maybe that was the reason we were put onto little iron beds to sleep in the afternoon. The difference in our ages came to tell when Frank went to Rosemary School, and I had to wait 6 months before going to High Oakham School.. My move to High Oakham coincided with the ending of World War Two..

It was early in 1949, we both strolled down Oxford Street , just under the bridge on Woodhouse Road, to see if there were any jobs going at Landers Bakery.. Drivers told the two of us when they saw us walking up the street, ” these are two likely looking lads “.. We never thought at the time we were joining such a fantastic company , who’s history we would play such an important part.. We were both taught to drive whilst working at Landers, and both passed the driving test at the first go..

In 1951, there came the first real separation for the two of us.. The time had come for the compulsory calling up of those at the age of 18 to serve our country.. Frank being 6 months older than I, had to go 6 months before me.. Being enrolled in the Royal Leicestershire Regiment . The Korean War was on, and Frank , after training, was shipped over to take part in the Korean Conflict.. At the time, soldiers in Korea , were shipped elsewhere after a 6 month tour of duty in Korea.. He was given Leave to come back to Bradder Street,  Which gave us chance to catch up before I too at the age of 18 received the King’s Shilling, that is,after swearing allegiance to the King.

The pride for his family would have experienced his being  chosen to represent his Regiment at the Queen’s Coronation, back in 1953..  I was so proud of him myself.. A lad from Bradder Street, a lad I had been brought up with, a lad I had gone to school with, a lad who had served in Korea, a lad who was my Best Friend..  I could not have been more proud..

After completing our countries service, we both returned to carry on with the jobs we left.. We both Married the young ladies who waited our return. We both had two children, he a boy and a girl, I two girls.. Life was going great for both of us..

Then , the bombshell hit me… Poor Frank became very ill, so ill in fact , he could not carry on the sales work he was doing. Time off work was inevitable . But he was often waiting for me when I returned to the bakery, so we could share a cup of coffee and a chat in the canteen. Ted Morris the then General Manager, kept him employed doing odd jobs, One I recall was painting the new small shed that was bought for the gate man..

Eventually , his illness took it’s toll, Frank my good friend lost his fight at the age of 28.. Leaving behind a family who I know can be very proud of their Father and Husband…. Oh and a friend who will never forget him..