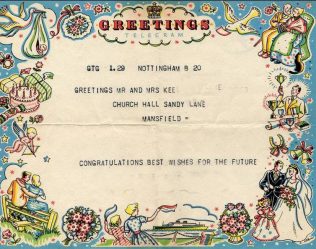 During the war between 1941 to 1943, I was the unofficial telegram boy in Forest Town. Now for the younger readers I must explain what a telegram is.

Well in those far off days, ordinary people didn’t have telephones. If you had to ring anyone you used the public telephone box, but if you had an urgent message you would send a telegram by going to the post office and filling in a form with your message on. This was then phoned through to the nearest post office to the recipient, where it was then written onto another form and delivered by hand by the telegram boy. As you paid so much a word for your message you had to make it as brief and specific as possible, (I believe this was the birth of the cryptic text messages used today).

In towns they had official telegram lads in proper uniforms with little pillbox hats and a little leather pouch to put the telegrams in. They often rode about on big “sit up and beg” bikes. In villages the post master was supposed to deliver the telegrams.

In 1941 the postmaster at Forest Town was Graham Orchard and he recruited me to do the deliveries. I lived only a hundred yards away (on Kingsway) so I was nice and handy. I called in before school, then at dinner time and again after school. Now the problem was the area covered was from Newlands in the east to Chadburn Road in the west, Violet Hill in the south and the Small Holdings down Old Mill Lane. I was paid according to the distance I travelled, 2d (0.83p) for the close ones, 3d (1.25p) for the middle distance and 4d (1.67p) for longer journeys, so I had to leap on my bike and go as fast as possible. The trouble could arise when I had a telegram to deliver on Oakland Road, plus one for Violet Hill and one on Langwell Drive. Believe me if this occurred at dinner time I didn’t have much time to get my dinner.

Some days there were no telegrams at all and while I had a comfortable dinner I didn’t get any pay, also if the weather was bad this could make things difficult. Most telegrams were of a personal nature and you always had to ask the person you delivered to if there was a reply. In the middle of the war many telegrams were of a traumatic nature, someone missing or even confirmed as ‘killed in action’. Mr Orchard  always warned me of the nature of such messages, but it was always very difficult because we knew all the boys, they were people we had looked up to as kids and it made such episodes much more poignant. On the brighter side there was a few times when someone who had been missing was found alive but was now a Prisoner of War. Those occasions were more joyful and the experience was rewarding but humbling at the same time.

When I left school my sister Joyce took over for a time but what happened after that I don’t know. Perhaps someone in the village continued helping Mr Orchard and would like to tell us.            Kelky