You are here: HomenextTopicsnextBusinessnextIndustrynextMiningnextVisitors Book 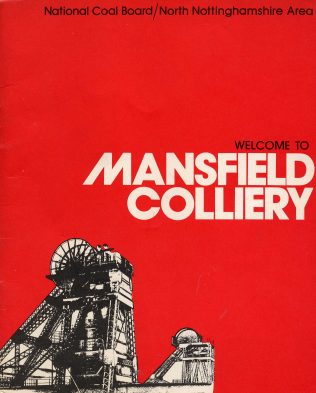 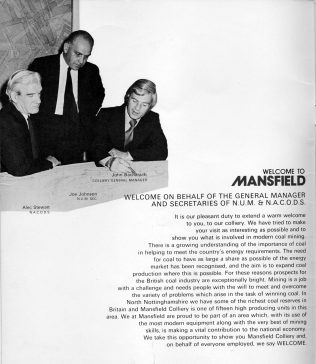 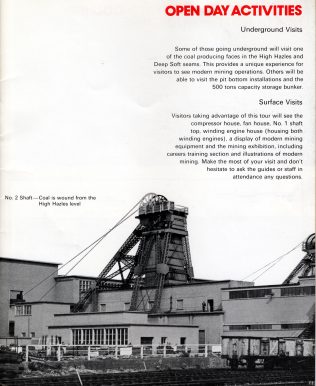 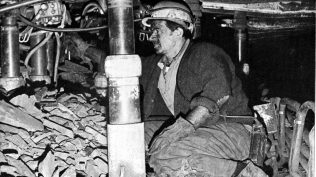 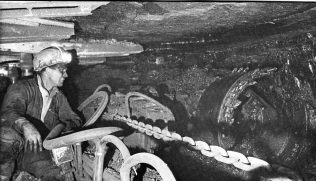 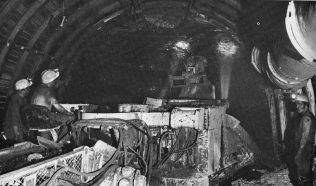 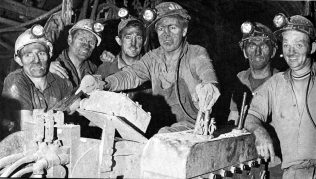 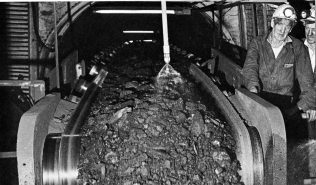 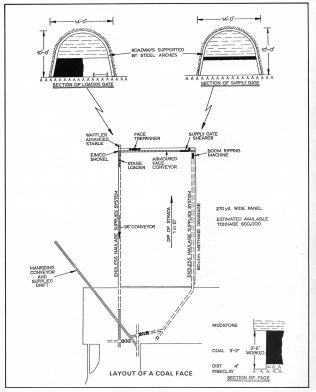 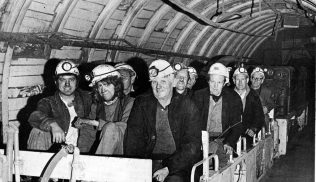 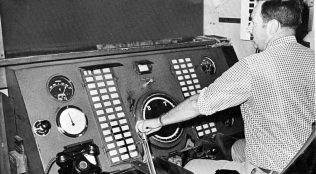 zoom
At the controls of the winding engine 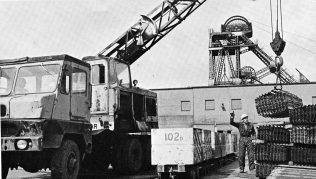 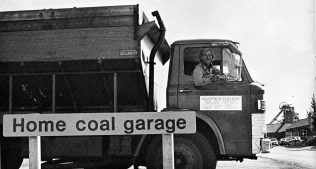 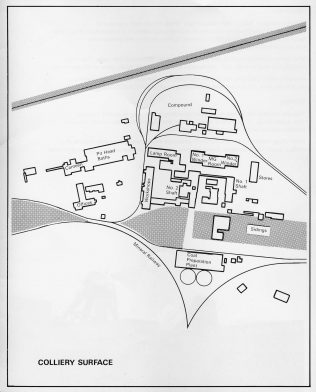 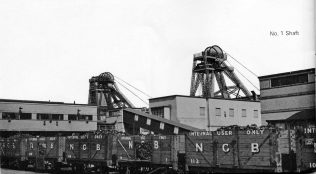 The information and photographs in this page are copied from a  booklet that welcomed visitors to Mansfield Colliery. It gives a real insight into an industry that played a valuable part in the local community. The publication which appears to have been produced by the NCB is not dated, nor credit given for the photographs.

The colliery is situated two miles to the East of Mansfield and is one of fifteen colleries which compromise the North Nottinghamshire Area.

The mine was developed by the Bolosover Compapany during the period 1904-1905 and production started from the Top Hard seam in 1906. In 1931 the High Hazels seam was developed. followed by the Depp Soft seam in 1957.

The present annual output of the mine is some 850,000tons, produced in about equal quantitites from the High Hazels and Deep Soft.

Both seams are worked by “longwall advancing” methods. Working faces, usually about 270 yards long, are developed from the main roadway system and worked out to the boundary. It is usual to operate three such faces in each seam, to give a daily saleable production of about 4,000 tons. Each face advances on average about 1,800 yards and produces about 450,000 tons during its life of 36 months.

The production system normally consists of a flexible steel conveyor, known as a “panzer”, laid against the coal, along which a power loading machine travels. These machines are known as conveyor mounted trepanners and operate by coring out and trimming up a 2 ft. wide strip of coal, each time they pass through the face. The working face is supported by hydraulic, self advancing, roof supports. These consist of sets of jacks, capable of a thrust of about 30 tons each, which support the roof and provide a means of jacking forward the panzer after each pass of the power loading machine. The normal working height of the faces is about 4 ft.

Access to each working face is provided by two roadways: the intake (fresh air) roadway is usually 14 ft. wide and 10 ft. high and the return (used air) roadway is slightly smaller. All roadways in the mine are supported by steel arches.

The formation of the roadways is normally a mechanised operation and is carried out by using a powered shovel loader or a road ripping machine.

Most of the production faces are operated three shifts, requiring about 85 face workers per day. Planned output from each face is 800 to 1,000 tons per day.

A planned development programme is a continuous feature of the mine. At the current rate of production, about 15 years of life remain in the High Hazles and Deep Soft seams. Reserves in the deeper seams can provide the colliery with a life beyond the year 2,000.

Coal from production units in the High Hazles seam is brought to the shaft bottom by belt conveyors. The shaft bottom layout includes a 500 ton storage bunker, from which coal is automatically loaded into the skips for transport to the surface. Coal from the Deep Soft production units is transported by conveyor to the bottom of the Deep Soft access tunnel, up which it is transported by a “cable” belt, driven by a 500 HP motor, which feeds on to the High Hazles conveyor system.

The miners travel to and from most parts of the mine by diesel hauled trains, rope-hauled “paddies”, or conveyor belts specially adapted for manriding.

Mansfield Colliery has two shafts: No. 1 is the fresh air shaft and provides access to the mine for men and materials; No. 2 shaft is used to exhaust air from the mine and for the transport of coal.

Initially, coal was wound from the mine in small tubs, but after the reorganisation of the shaft bottom in 1947, skip winding was introduced. The present capacity of the shaft is about 550 tons/hour (60 skips/hour) of raw coal.

Air is drawn through the mine by a 750 HP fan located at the top of the No. 2 shaft. Air distribution is controlled in the mine, so that satisfactory environmental conditions are obtained in all working places.

The raw coal hoisted out of the mine consists of a mixture of coal and dirt. This material is conveyed into an extensive coal cleaning-plant with a capacity of 500 tons per hour.

All products are rigorously controlled by frequent sampling. Mansfield has a reputation for consistent quality.

The products are transported away from the colliery by road and rail, in the proportion of about 40% road and 60% rail.

The dirt extracted from the raw coal is taken from the preparation plant to the spoil heap by dump trucks. There it is graded and consolidated by bulldozer. Special regard is paid to the shape and treatment of the tip and to the method of tipping to ensure that operations are, as far as possible, unobtrusive and that the spoil tip presents an appearance in keeping with the landscape.

Almost all equipment at the mine is electric powered. Three 11,000 volt East Midland Electricity Board feeders supply the two main generating motors, which convert the alternating current to direct current for the winding engines; four 3,300 volt cables supply power to the underground workings.

The mine employs about 1,450 mineworkers. These include men engaged on coal face work, development, repairing of underground roadways, transportation of coal and supplies, mechanical and electrical craftsmen, surface workers and underground and surface supervisors.

Most personnel work on shifts and rotate weekly days, afternoons, and nights. The mine operates five days a week, with maintenance and special work taking place at the weekends.

All mineworkers belong to the N.U.M. and good relations exist between the Union and the management. Supervisory personnel belong to either NACODS, COSA or BACM.

The coal industry has always had a good reputation for the way its people organise their leisure hours. In this field of social welfare, Mansfield Colliery has a wide variety of facilities centred on the Mansfield Miners’ Welfare.

Activities available for use by the colliery personnel, their wives and families, include all kinds of sport, youth activities, drama, dancing, and first class entertainment by visiting artistes.