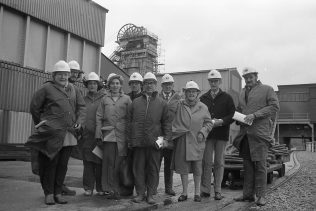 An article in ‘Coal News’ October 1974 tells of a Saturday (believed to have been in September) in September when three collieries Mansfield, Bevercotes and Harworth held special open days for visitors  to go on look-around tours underground and surface. People from all over the country and some from Germany, Australia and America were among the visitors.

Mansfield Colliery Open Day visitors from near and far.

The report on the Mansfield open day reads:-

With a ‘full house’ for underground visits – attracting people from just across  the road and up to 6,000 miles away –  the phone was still ringing for late bookings when Mansfield Colliery staged their Saturday open house.

“People have been ringing up all morning, and we’ve been able to fit the lot in with surface tours” said admin officer Ron Bullock. “There’s been a lot of interest among locals, but we’ve also had quite a few coming from further afield -even some on holiday from abroad, including a Californian family.”

Big attraction was the chance to see how Mansfield’s 1,450 pitmen are producing 850,000 tons of coal a year 700 yards below the surface.

One of the locals who booked her trip early  was 73year old widow Mabel Moult, whose husband Joe worked on the screens at Mansfield.

After touring the pit bottom Mrs Moult said ” I found it a bit tiring, but very enjoyable – I’ll go down again if I the chance comes along.”

Altogether some 900 visitors turned up on the open day – 254 of them making up parties who went down to five of the pit’s six faces in the High Hazels and Deep Soft seams, and 180 who went on pit bottom tours.

For some of the parties to the coal surfaces – all about two miles out – it meant an eight minute ride down the 1,000-yard conveyor in the 1-in-4 drift for the Hazels to Deep Soft level, followed by a manrider journey. Pitmen in the 80-strong team of guides took them to see a face machine started up, and in the gate they got a close-up of a Dosco boom ripper.

Among those taking a ‘busman’s holiday was shift charge hand Jack Throssell who went down with son Colin, 18, a welder at the pit, and daughter-in-law Gillian,18. “I think it’s a good idea for folk to see what today’s mining is all about – it’s a pity we can’t show them even more,” said Jack.

After her first venture underground Gillian said ” I’m glad I’ve been able to see what the miner’s job involves -it’s been a real eye-opener. The ride down the long conveyor was quite an experience and the whole lay-out is so big.”

Having a second helping of life underground were Betty Smith, whose husband NUM Treasurer Dennis works on one of the districts, and her next door neighbour Iris Rawlings, whose husband Doug is an overman. Also in the visit to 124’s district were Mrs Smith’s daughter Sharon and her husband Edward Kuprewicz.

“We went down for the first time at last years Bevercotes open day, but there’s been more for us to see this time,” said Mrs Smith. “It’s been enlightening and interesting – and peoploe have seen for themselves what a difficult job miners are doing.”

For another 450 visitors there were surface tours of the colliery with machinery displays and careers training exhibition.

Mentioned above are just a few of the 900 people that visited Mansfield Colliery on that open day, does anyone recall the event? if so do tell us your own memories by adding a comment to this page. .