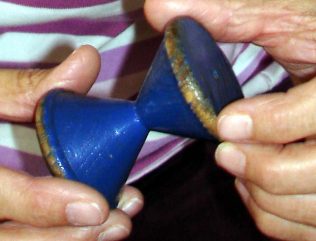 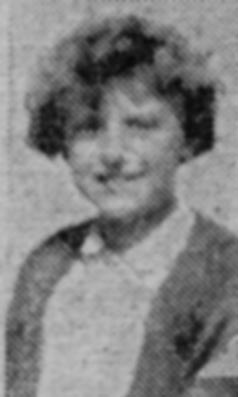 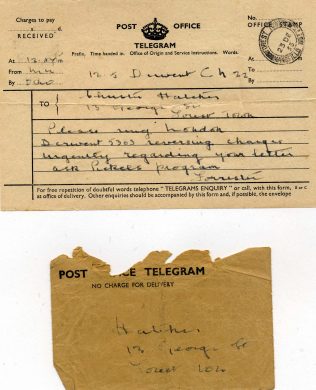 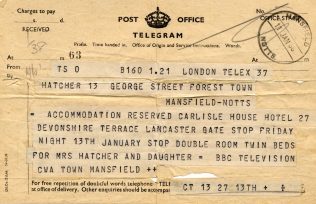 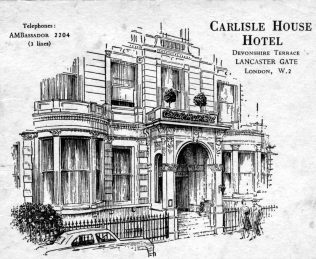 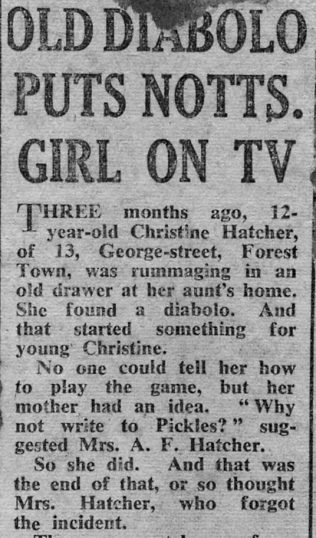 Today we here of many electronic games for young people some which take them off into fantasy land, however this is a true story of a simple wooden toy that created a wonderful adventure for a young Forest Town girl in the 1950’s. My thanks go to her for sharing the story and allowing it to be reproduced on the web site.

In the autumn of 1954 eleven year old Christine Hatcher was helping her aunt sort drawers out, when she discovered a small wooden toy which she was told was a diablo. Ever curios as all youngsters are, Christine wanted to know what you did with it? How do you play it? This diablo was minus its sticks, and no one could tell her.

Now while television was a fairly new commodity at that time and it certainly didn’t have all the channels and programmes there are today there was one programme hosted by Wilfred Pickles that encouraged people to write in with questions and requests etc. Being as no one could tell Christine anything about the diabolo her mum said why not write to ‘Ask Pickle’s’, so she did and her mum thought ‘thought that’s the last we will hear of that’.

However it certainly wasn’t the last of it, it was just the start because on the 23rd December Mrs Hatcher received a nasty shock when a telegram was delivered to their house 13 George St, Forest Town,  –  brown telegram envelopes often meant someone had died and she rushed to a neighbours thinking the worst and needing support. The content of the telegram contained a shock of a different kind because it read ‘To Christine Hatcher…please ring London Derwent 5303 reversing charges urgently regarding your letter ask Pickles program’.

Invitation to go on television

This was just the start, in January a letter arrived from the producers of the TV show Pauline & Larry Forrester, they confirmed details of telephone conversations and requested ‘ Will You please come to the Television Theatre, Shepherds Bush Green, London, W12 on Friday 13th January at 2pm. A telegram was also received saying accommodation had been reserved for Christine and her mother at Carlisle House Hotel for the night of Friday 13th January. This was rather a grand hotel and they were given a twin bedded room with its own bathroom.

The headmaster of Ravensdale School that Christine attended was contacted, he had to give permission for her to have a day off of school. Children at that time also had to be 12years old to appear on television, and luckily Christine had now had her 12th birthday. The headmaster announce it to the whole school in assembly. Local newspapers were quick to latch on to the story and carried the headlines ‘Forest Town Girl on TV tomorrow, and ‘Old Diablo Putts Notts girl on TV’. Extracts from newspaper cuttings that are not named or dated.

The great day arrived and the journey to London was by train from Nottingham on the ‘Flying Scotsman’ Christine had never been on an express train before, she had only ever been on the ‘Penny Emma’ (a local train). Another new experience was travelling in taxi that took them to the Shepherds Bush Television Theatre for 2pm. Christine recalls the studio as being like a theatre with royal boxes and massive TV cameras, she even had a dressing room with her name on the door.

There was an orchestra conducted by Eric Robinson and the whole programme was live, Christine was fourth on, the script reads:

“Wilfred reads the next request from Mr H Dixon of …Hull

Dear Yorkie Pickles, The other day I was assisting the wife with the usual clean through preparatory to the Xmas period, and we came across a box of very old toys that were mine when I was a kiddie. Amongst these assorted relics is an old one that I was skilful at handling – the old game of ‘diabolo’. I would dearly like to demonstrate this great skilful game to a modern generation, and let a few of them have a go.

Wilfred goes on to say ‘that in October we had a letter from little Christine Hatcher of …Forest Town…asking us to show her how this game was played, so we are able to carry out two requests at the same time.

Wilfred will call them on, have a few words, and get them cracking – he may have a go himself depending how it goes.” The time schedule for this event was just two minutes!

It was two minutes that Christine has never forgotten, she still has the original diabolo, and one that she was given on the show. This was an amazing experience for a young 12 year old school girl and it is still very fresh in her memory today (May 2011).

Foot Note –  a diabolo is a wooden toy seen in the photos above that you spin on a piece of string between two wooden handles (sticks), by manipulating the handles you can perform various tricks such as throwing it up and catching it, or manoeuvring the diabolo up and down the string.