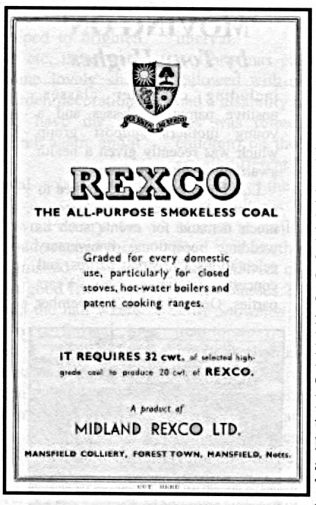 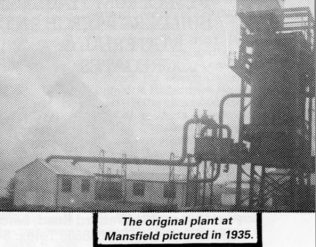 Some of you will recall the days when dark smoke from the coal fires was a regular sight from our chimneys. The air needed to be cleaned up and the pollution stopped.

In 1932 ‘a company was born that was soon to prove that while there is no smoke without fire, there certainly could be fire without smoke’. This company eventually became known as Rexco. Within the next few years after success with its processes and inventions (where others had failed) ‘The first Rexco plant to be built came into production in 1935 on a site adjacent to Mansfield Colliery.’

‘Coal for the process was supplied from the colliery which was then working the Top Hard seam at the price of 11s [55p] per ton. The Mansfield plant which consisted of two batchwise retorts cost £2,279 16s 9d.’ ‘The plant carbonised 3,095 tons of coal in its first full year, the retorts having a 36 hour cycle.’

‘Further development at that stage was curtailed by the Second World War’. ‘However the plant was very active through the war making a motor fuel under the trade name of Motor Rexco and large tonnages of charcoal’.

‘Coal became more plentiful from 1948 onwards which allowed this small plant to go back to full production and eventually sufficient was available for other plants to be built. [sic] By 1954 capacity at the Mansfield plant had been increased to 30,000 tons of coal carbonised per annum.’

Over the years Rexco had expanded greatly and established more plants including those at Edwinstowe, Snibston Leicestershire and Comrie Colliery in Fife.

The plant at Mansfield had been in production for 37 years when the decision was made to close it ‘because of the uneconomic cost of bringing it up to modern standards.’

In November 1981 just prior to their Golden Anniversary, Rexco had become part of the Burnett and Hallamshire Group.

No doubt this will stir a few memories not only for our readers/viewers who worked at Rexco, but it will also take people back to the days when smokeless fuel was first introduced. ‘Going Smokeless’ was not very popular at first, people were used to laying the fire with newspaper, sticks and coal to get a good blazing fire going. Not forgetting that today’s children won’t know any of this.