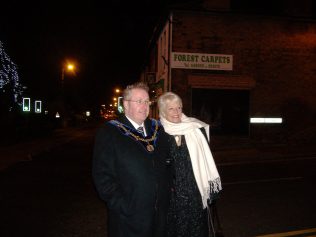 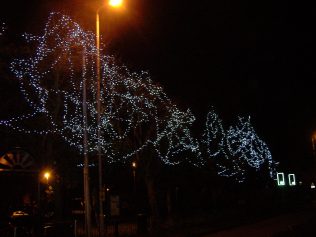 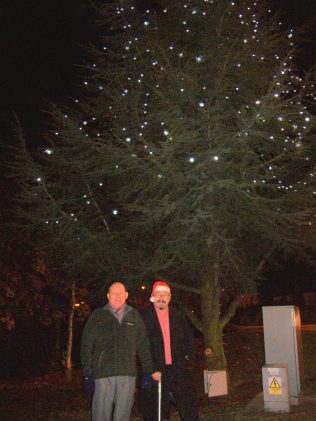 Forest Town Community Council decided to form a small committee in 2009 to raise funds to purchase some Christmas lights for Forest Town.  It was thought that the village was sadly bare at Christmas time apart from the usual tree lights at the main crossroads.  After much persuasion by our local councillor – Heather Henshaw – most of the councillors representing our wards gave very generously from their council ward allowances.

It was decided that the first lights purchased should be put up in the centre of the village, and so the large trees at Kingsway Hall facing the main road were festooned with strings of brilliant white lights.  The first switch on was a low key event as the lights were only purchased in November which didn’t leave much time for planning and organising an official ceremony

Mick Barton – Chairman of Mansfield District Council and Heather Henshaw our local councillor did the honours and it was attended by about 30 other people from the Community Council.

For 2010 it was decided to try and bring more of the Community into the event and further meetings took place between the Community Council Lights Committee and representatives of the Methodist Trinity Community Cafe and St Albans Church.

More funding was obtained from Notts County Councillors Bob Cross and Martin Wright and new lights were purchased for the large tree at Pump Hollow Road/Old Mill Lane traffic lights and refurbished lights for the tree in St Albans churchyard.

The lights ceremony took place on November 25th starting with a short carol service at St Albans Church lead by Rev. Philip Stead.  The new lights for the Christmas tree at the cross roads were switched on by Notts County Councillors Martin Wright and Bob Cross

A lantern procession then made its way down to the Methodist Church where another short carol service took place led by Rev. Bob Jones.  The main lights were switched on outside Kingsway Hall by Mansfield District Councillors Heather Henshaw and Alistair Windeatt.

Afterwards free refreshments were served by the Trinity Café assisted by members of the Methodist Church and the Community Council.  Mince pies were kindly donated by the Asda Store at Forest Town.  Donations collected on the night amounted to £104.45 which will be put towards next years Christmas lights.

After the refreshments a thank you speech was given by Jim Gregson (Vice chairman of Forest Town Community Council) to all the volunteers who helped to make the night such a success.

It is hoped to make this an annual event and more fund raising will be done to purchase even more lights for the future.  It certainly brightened up the village for Christmas and brought various groups together as a community.