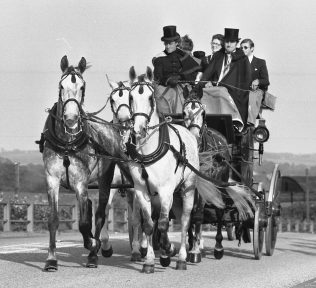 The development of the postal service between Mansfield and other postal districts was a gradual process along with the improvements in roads. In 1837, the Mail Coach carried all mail between major towns & cities. The listing below, taken from Local Directories gives some idea of the destinations, frequency, and period, the ‘Royal Mail Coaches’ served. It should be noted that they did not depart from the Post Office, but from the local Inns, as they were not just for mail, but also carried passengers.

The demise of the Mail Coach by the rapidly expanding Railways during the latter half of the nineteenth century affected the postal service in Mansfield, as it moved from road to rail. The Chesterfield and Worksop Mail Coach service are two examples, I am not aware of the changes in the Nottingham service (can anyone provide this?).

It is suggested in a local publication that the Chesterfield Mail Coach ceased on the 4th September 1859, but the Postmaster General’s minutes of 18th March 1856 suggest this was earlier, unless the minute took three years to action, which is doubtful.

On the 18 March 1856 correspondence to the Postmaster General referred to the Stage Coach which conveyed Mail between Sheffield, Chesterfield, Mansfield, and Nottingham, was now loosing its exemption from the Turnpike Road Tolls, and was about to cease running. Trains between Mansfield and Nottingham would now be used, No payment being necessary as the line belonged to the Midland Railway Company with whom the Post Office had a general contract for the use of their trains.

This service continued to run for more than another ten years after the Chesterfield Mail Coach ceased, but again there seems to be a discrepancy with the number of years it was in operation.

On 1 Jan 1847 the Midland Gazette reported: ‘New Mail. – the coach from Worksop to Mansfield and back daily now conveys mail-bags, which will be an additional public accommodation and advantage. This mail, and the one from Sheffield to Nottingham and back, both arrive at Mansfield at eleven am, it is expected there will be a letter delivery then, as answers can be returned by both mails at three pm. the new mail from Worksop to Mansfield will cause a more rapid (and, of course, more convenient) communication between Birmingham, &c., to Gainsborough, &c.’

In the Mansfield Advertiser 2 Dec 1871 edition, it was reported that: ‘The Mansfield to Worksop Mail Coach. – This Mail Coach which has run between Mansfield and Worksop for nearly 40 years ran for the last time on Thursday unfortunately this is the only means of communication we have at present with the neighbouring town of Worksop.’

The report from both newspapers implies that the Worksop Mail Coach was only in service for approximately 25 years! Not the 40 as reported. It is possible the Coach ran for 40 years but only carried the mail for the last 25 years.

Not everyone had to pay Tolls (depending on individual Acts) for example Mail Coaches were exempt; along with Royal Family, Soldiers in uniform, Parsons on parish duty, Funeral processions, and prison carts.

The Demise of the Mail Coach

It is ironic that the beginning of the 21st century saw the demise of the Railway as a Mail carrier. The first time Mail was transported by the railway was in 1830 and by 1838 was being sorted on board the train, this became known as the Travelling Post Office (TPO). The last TPO to run was Jan 2004.