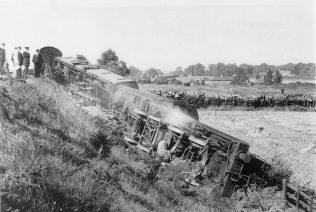 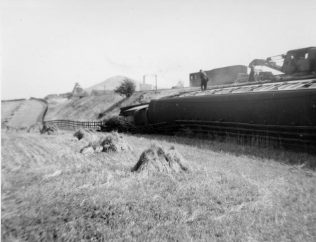 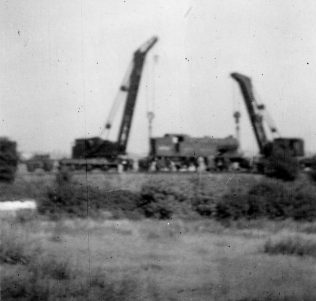 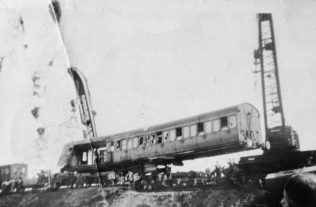 Today as there is very little evidence that there were once railway lines in the area, it is hard to imagine that the sight and sounds of trains were once very prominent in Forest Town.

There are still local people who recall an early morning train accident that occurred on 2nd September 1950, and not surprisingly some rushed out to see what had happened. Over the next few days until the engine and coaches were removed it would have been a spectacle of great interest. Fortunately some people took the opportunity to take these photographs – who they were is unknown but their work is acknowledged.

The train involved in the incident was the 9.18am three coach passenger train travelling from Nottingham to Edwinstowe, and the accident happened when the tank engine and two leading coaches overturned down a 10foot embankment, while the rear coach remained at the top it was tilted over rather precariously. Fortunately there were only three passengers on the train and neither they nor the driver, the fireman nor the guard were injured. The all had lucky escapes.

The journey and accident

The driver had left Mansfield and worked the rising gradient without any problems, he still had the regulator open and travelled at about 20 to 25 m.p.h. down the bank towards Mansfield Colliery.

After sighting the Mansfield Colliery Down Distant Signal, he suddenly felt a nasty lurch to the left and the engine rocked violently. Realising the engine was derailed, the driver closed the regulator and applied the brake. As they went down the bank and overturned he held onto the cab and escaped without injury.

While the damaged line was repaired and re-opened to traffic the same day, the engine and the two coaches were not removed from the bottom of the embankment until Sunday 10th September.