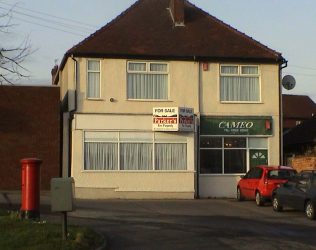 zoom
Sherwood Hall Post Office Premises for sale 2004. Note the post box is in a different postion to the 1995 photo. 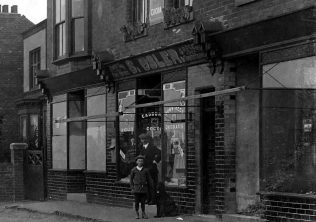 zoom
Forest Town Post Office in the middle of the three shops, circa 1910. Shadrach Osler and his son Montague are in the picture - note the wall post box.
S Osler 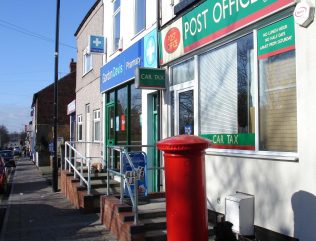 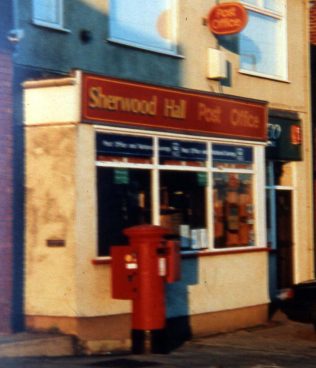 One of the shops that for many years has been an important asset to local communities is the Post Office, sadly though, these are now getting harder to find as many have been closed.

It is interesting to reflect on the growth and demise of the local postal service in the Forest Town area.

Forest Town’s first postal facility is recorded in 1905 when a wall letter box was erected, unfortunately we have no indication of where this was situated. By May 1907 the village had a sub post office, this was the middle one of three shops built on Clipstone Road near to the Methodist Church. A post box was set in the wall between the post office and the shop on its left. The post box was emptied from inside the shop. The first postmaster was Shadrach Osler, his wife was Eliza and they had one son called Montague.

Luckily one of the Oslers, and we don’t know if this was Shadrach or his wife, saw the value in publishing post cards of the village, a number of the early ones bare the name E Osler or S Osler.

At a date unknown, the Post Office was moved to right hand shop where it is still in business today and run by Binda & his wife Billie

Over the years there have been various postmasters/mistresses in this Post Office, I know of the Needhams, maybe some readers can name others. At one time the post was sorted locally and at Forest Town this was in a shed/building at the back of the Post Office.

As the Forest Town area expanded with more and more housing there was a need for additional Post Offices and letter boxes. These sprang up at Eakring Road (local people refer to this as Crown Farm), Sherwood Hall, and Newlands. Further research is needed discover the dates when these opened. Sadly all three of these have now closed.

The Eakring Road/Crown Farm, Post Office was once run by William (Billy) Powell, who in his younger days had been a well-known footballer, having played for Sutton Town, Retford and Sheffield Wednesday. How long he was post master at this post office is unknown, and it may be confusing to discover, as his son, who was also named Billy ran the post office after him. Today [2009] the premises are a property consultants. The pillar box is still there for people to use.

Sherwood Hall Post Office was built around the early 1940’s and George and Kitty Holmes were one of the first, if not the first owners. Mrs Holmes ran the Post Office while her husband ran the garage next door. When they retired Mr and Mrs Gandy became the new owner. Bert Littlewood took over the garage. In the 1970’s Mrs Salmon was the post mistress, I believe she was followed by Stuart and Eleanor who were the owners when it was closed as a post office a few years ago. The premises are now Elegance, a beauty establishment. A pillar box remains in close vicinity.

Newlands Post Office which is on the slip Road running parallel to Clipstone Road East, was closed in 2008. Eric and Brenda Payne were there around thirteen years serving a wide area of the Newlands community. it is understood the original shop was a general store plus Post Office, and was double the width it is now, encompassing the adjoining premises. For many years a letter box built into a brick pillar was at Newlands Post Office, then mysteriously someone knocked this down and the post office eventually replaced it with a lamp box on a steel pillar. The post box has now been removed and the future of the building is unknown.