You are here: HomenextTopicsnextBusinessnextIndustrynextMiningnextMansfield Coal Miner to Chelsea Pensioner 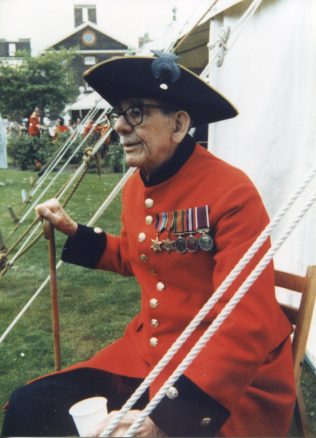 John (Jack) Mayhew Higginbottom was born on 4th June 1908 in Doe Lea, Derbyshire, he was the 5th son of Henry and Charlotte Higginbottom.

Henry and Charlotte had a large family and they moved to Forest Town near Mansfield  in 1915  living in Second Avenue. Henry was a coal miner and it is safe to assume he worked at Mansfield (Crown Farm) Colliery.

John (Jack) along with some of his brothers and sisters went to the village school in Forest Town, from where he left in July 1921 to start work at Mansfield Colliery. He stayed there until after the 1926 strike and in October 1927 joined the Royal Artillery, enlisting at Nottingham and doing his basic training at Woolwich.

He rose to the rank of Acting Major and his medals included the 1939/45 Star, and the Burma Star.

He left the army in 1946/7 and began a civilian career, first as a Remedial Gymnast at Pinderfield Hospital, then with the Admiralty Constabulary, and later the  Atomic Energy Constabulary. Then after a short period running a boarding house he eventually retired in 1969.

John (Jack) Higginbottom eventually joined the Royal Chelsea Pensioners in 1986, and his sister from Forest Town often went to visit him.

This former miner from Mansfield (Crown Farm) Colliery certainly had an interesting life once he left the coal dust behind, a life that ended wearing the proud and colourful uniform of a Chelsea Pensioner.